Tuesday is basically worthless…it is filler, a placeholder, a spacer, a shim to fill in a gap.

It is a washer on the bolt of life.

So, in unabashed observance of The Other McCain’s Rule 5 of How to Get a Million Hits on Your Blog in Less Than a Year – aka the Christina Hendricks rule – and to attempt to make Tuesday relevant, I present to you the lovely and talented (and in my opinion, highly underrated) Sarah Shahi. 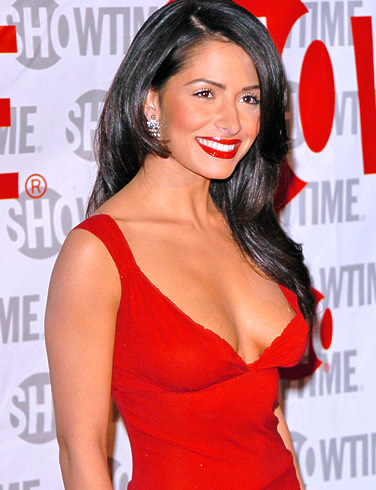 Her IMDB bio: Sarah Shahi was born Aahoo Jahansouz in Euless, Texas, to an Iranian father and Spanish mother. She is a former National Football League cheerleader and a great-great-granddaughter of the 19th-century Persian Shah Fath Ali Shah Qajar by Begom Khanom (daughter of Hossein Qoli Khan Afshar, niece of Begom Khanom, daughter of Emam Qoli Khan Afshar), through their son Jahansouz Shah. She attended Trinity High School and Dallas’ Southern Methodist University, majoring in English and opera. As a teenager she won several beauty contests, and took first place in the Miss Fort Worth USA pageant in 1997. She joined the Dallas Cowboys cheerleaders and was part of the 1999-2000 squad. She also appeared on the cover of their 2000 calendar.

You have seen her portraying a lesbian DJ in The “L” Word, a cop in Life and now a lawyer/mediator in Fairly Legal on the USA network.

You may click the images below the fold to enlarge (double entendre intended)…may be NSFW depending entirely on how much of a Sarah Shahi fan your boss is.