Murphy’s 3rd Law of Technology – Technology is dominated by those who manage what they do not understand.  (www.murphys-laws.com). 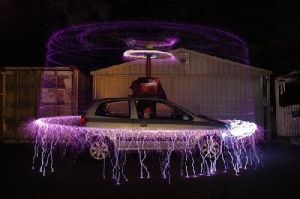 technology, quite another to prepare the infrastructure to support that change and yet again another to address the legal, moral and ethical issues associated with it that illuminate the most base human nature of greed.  From ancient times mankind has had a basic understanding of the principle that energy can’t be created nor destroyed – only changed in form.  Sometimes, however we forget that one way or another the cost of energy has to be paid, either by the user or someone else.

The case in point is the current rush to switch from internal combustion powered vehicles to electric and plug-in hybrid ones.  Motion is motion.  It takes energy to move from one place to another.  Whether the energy comes from petrochemicals or a “greener” source, it has to be inserted into the vehicle from somewhere.  As car owners switch to electric vehicles, the source of the energy is shifted from the corner gas station (and the infrastructure it took to produce and deliver the fuel there) to the location where the vehicle is electrically recharged.  For the individual car owner this is a no brainer.  A couple of bucks worth of “juice” from the outlet in the garage versus several hours wages to fill the tank seems like a super trade.  That is until we consider the real cost of getting that electricity into the vehicle’s batteries.  Among the many issues that arise when we consider not just one but several owners recharging in a neighborhood, there are two that need to be addressed by policy makers…and quickly.

First, the collective load on the electrical generation and distribution system may be the equivalent of an extra three houses – for each plug-in car. (www.ecnmag.com/Articles/2011/02/Main-Circuit/Challenges-of-Charging-Plug-in-Electric-Hybrid-Vehicles) While this may seem easily handled at the neighborhood level, when compounded across a city which may already be nearing its capacity limit the impact can be stunning.  Second, and perhaps more significant, is that because it is quite likely that most people will recharge at about the same time, the simultaneous drain may very well tax the whole grid beyond its limits.  The result is the likelihood of “brown-outs” or worse.  The obvious answer is increasing capacity of the grid all the way through the system from the power plant to the residential service connection.  Who will pay for these improvements?  Will it be the taxpayer?  Will it be all electrical customers without regard to their use of electric vehicles? Or, will the cost be born by e-car owners in the form of a surcharge on tax on their electric bill?  These questions must be answered by intelligent policy makers to avoid the ethical dilemma of having those who “have-not” pay the way for those who “have”.  If not answered by policy makers, the market will surely answer the questions itself and that answer may be a complete collapse of the initiative to move to a “greener” transportation system.

Another ethical as well as moral and even legal dilemma is plugging your car into any available outlet whether it be your employer’s, your neighbor’s or one belonging to the neighborhood strip mall.  If you do so without paying, is that stealing or in the case of your employer, embezzlement?  If so, how will law enforcement deal with it and how will the courts prosecute it?  If you’re not paying for your energy, who is?   TANSTAAFL (There Ain’t No Such Thing As A Free Lunch) – Robert A. Heinlein.