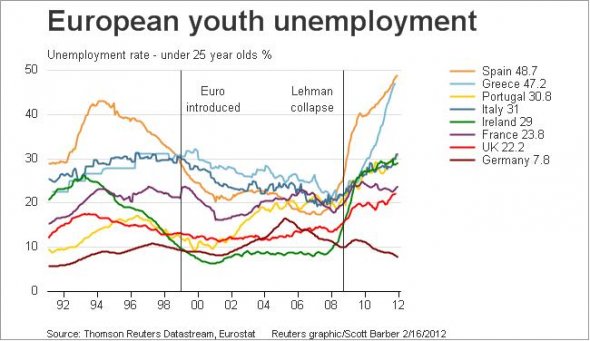 As the EU braces for the big “Grexit” – the exit of Greece from the EU, there is hand wringing in Brussels over the immediate impact on the financial systems. Significant problem, true enough – but the immediate is always the enemy of the long term. Even if they can hold it together:

The EU is dead as an economic power for the next 50 years.

The Marxist policies of the socialist democracies have irreversibly tilted the resources of government toward older citizens by promising things like universal health care, defined benefit retirement payments and other welfare state programs that are far more utilized by the older citizens – the same type of socialist “Utopia” all power hungry statists promise worldwide, including our own current president, his party and enabling “progressive” Republicans.

The EU welfare states have burdened the capitalistic side of their economies with so much cost that they can no longer generate enough cash to cover the bills…and the bills are coming due.

The EU is already a corpse – the bureaucrats just haven’t realized it yet – in reality, they are now just arguing over where to bury the body.

Unemployment in the under-25 groupings are the most important warning signs for any economy. This is true because this is the segment of the work force who are typically less expensive to hire and provide the basis for any economy. Free markets adjust entry salaries to incorporate the lack of experience – essentially  part of what entry level employees receive in compensation is something that is more valuable in the long run – experience. Young people, freshly educated, are the raw material that all economic growth is constructed with and the EU is denying these kids the opportunity to accumulate experiences that will make them more productive later in life.

The chart above shows the desperation of young people in most of the EU countries. This is leading to:

There are 4 types of welfare states, with the EU countries that are performing the worst in employment in what is termed the “Mediterranean welfare state“:

The Mediterranean welfare state (Italy, Spain, Portugal, Greece) is characterized by a “rudimentary welfare state”, with a strong internal polarization in social benefits. Although there is no minimum income scheme in Italy, Spain, Portugal and Greece, the retirement benefits for the citizens who qualify are the highest in Europe. There is a class of “hyper-protected individuals” (white-collar workers), but also a large number of unprotected individuals (irregular workers, young people and the long-term unemployed). The degree of state activity in the welfare sector is extremely low and not efficient in reducing poverty at the lower end of society.

This model seeks to create employment at the lower end of the age scale by lowering retirement ages and increasing benefits to incent older workers to leave the workforce earlier – this only encourages more people to leave at the peak of their earning years, lowering taxes drawn into the system and eventually collapsing it when the tax inflow can’t keep up with the benefit outflow. Because of this guarantee, there is no incentive for workers to invest any of their own money in retirement, leaving retirees at the mercy of the respective governments.

Politicians love to cynically state that “the children are our future” – in this case it is true.

Even if the EU is able to glue itself together – which is in doubt, if you were France, the UK and Germany, would you allow your economy to be grounded by the PIGS? It may be too late even today – for many decades to come the term “lost generation” will become the explanation for the demise of the EU as an economic power.

The Bible says in Romans 6:23 that the wages of sin is death  – I say that the wages of economic stupidity seem to be the same. Hopefully the November elections will turn America away from Obama’s hope to change us into a European style welfare state. We have already seen that movie – we know how it ends.