Just a little silliness to go with the beer and hotgdogs…

I would have no problem with the proverbial new, uncorrupted Senator
riding into DC on the back of a mule. But when the ass turns out to be
the newly elected official, as in the case of  ‘Uncle Bud’….

— Keith Olbermann, on Countdown, November 3rd, 2010
“…and to The Media’s claim that I only supported airheaded, clueless
women who are unfit for office, I campaigned for ‘Uncle Bud’, didn’t I?
(points fingers, winks) Gotcha there, media!”

–ex-Gov.(AK) Sarah Palin
Overheard at a Victory rally
“..Really, you call the winner in each race, no matter what
party? ….That’s real sportin’ of you Mr. President….well, thanks
again, and let’s have us one of those beer summits after the fuss is
over….you done your homework, sir, I do like the purified spirits,
that is true,..see you at the Impeachment, just a joke…sir.(hangs up)
That was the President, calling me! And to think, only a few weeks ago…

{switch from street camera to inside local gov’t office}

Uncle Bud: What business is it of yours who I affiliate with, young feller? You
temp with the FBI or something?

Uncle Bud(seeing he is on the air again): Oh Hi folks, Uncle Bud here,
to let you know the steps one has to take before getting your hands on
our tax money, or, in other words, how to run for office. We live in a
state with no filing fees(In a stage whisper) now don’t go tellin’ the
gub’mint, they would fix that oversight in one big hurry.
Behind the counter here is Sandy, who has been assisting me in the
process. So Sandy, all I do is sign here, here, initial here, here…

Clerk: Sanjay, Mr. Bud. And yes, once you have signed these, and you get
10,000 signatures, you are a candidate for the office of US Senator from
the state of…

Cameraman: Bud, don’t sign those, we are just supposed to demonstrate
how easy…

Uncle Bud: So what’s that about? We haven’t outsourced enough jobs to
India, they gotta send ya’ll here to InSource the rest of our jobs?

Clerk: Sir, I was born here! This is my country!

Uncle Bud: Yeah, one generation, and you own the place. Ain’t nuthin’ in
the Constitution okayin’ that!

Clerk: My elders, I respect. You are an old coot, and I pray to the Gods
that there are not 10000 people in the state stupid enough to…. 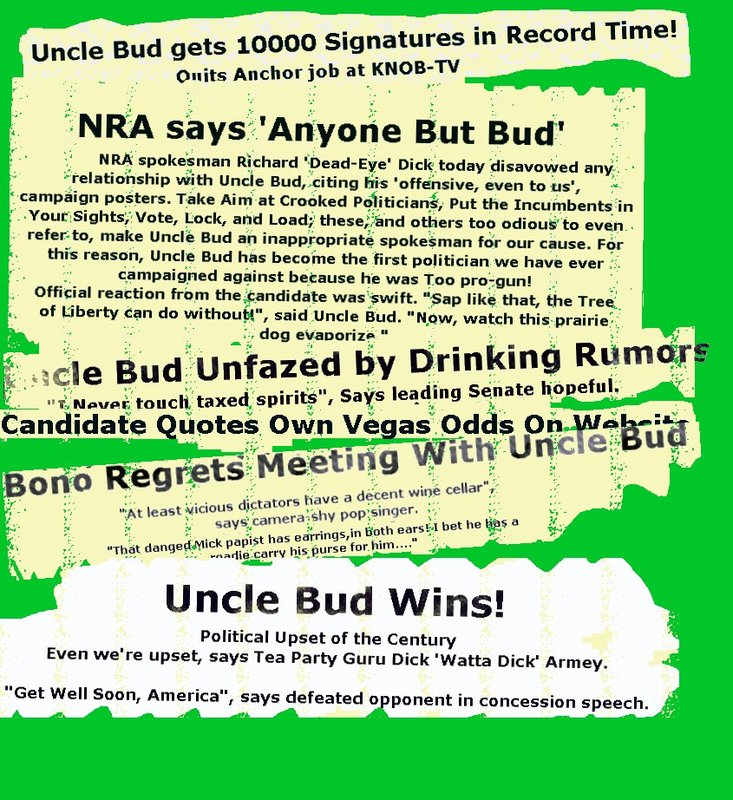 Quote from People magazine:
…When he was awakened from a nap and informed of his victory,
Uncle Bud said, “Call the bar, start me a tab.”

Uncle Bud:…And now the President calls me Senator! You people are
gonna be proud of me, I’m gonna change your lives. We’re gonna drive out
the communists, the unions, the communist unions, and the socialists,
and the, and the…Look! It’s Jimmy, my manager. Hey Jimmyyyyee! We did
it! Now what! (Uncle Bud spits out a laugh and staggers towards Jimmy).

Jimmy: You’re undoing it Uncle Bud, is what. This is the wrong hall, and you
you just called a bunch of Teamsters communists. Oh hell, Uncle Bud how are
you going to give a speech in this condition?

Uncle Bud: It’s Senator Bud now, get me one for the road, son. Hey, can
I start a war with India, get our damn jobs back?

Jimmy: (sighs) I’ll get right on it, Uncle Bud.