We the People of the United States…

–          Preamble to the Constitution of the United States of America

…this nation, under God, shall have a new birth of freedom — and that government of the people, by the people, for the people, shall not perish from the earth.

As a general rule, Republicans, conservatives, libertarians and classical liberals champion, at least in their rhetoric, a move to smaller government. The theory being that we are chasing the Jeffersonian ideal that the government that is best is the one that governs least.

But history reveals another picture.

Due to things like baseline budgeting, the ability to manipulate the money supply through the Treasury’s printing presses and the ease at which public debt can be accumulated, even during the Republican controlled governments and with the exceptions of the post-World War I and II periods, the growth of government has merely subsided (as a percent of GDP). While it does slow at times – in real dollar terms and throughout our post WWII history, it has never truly been reduced.

We will never control a government that we do not have the ability to say “no” to…and today, we legally can’t.

Referencing the next charts of federal spending showing government size  as a percent of GDP and in real dollars spent, one can see two things: federal spending took a substantial jump as President Lyndon Johnson’s Great Society programs kicked in and our society became significantly more socialistic as the more liberal (socialistic) Baby Boomers began to take control of government. The only period where federal growth as a share of GDP slowed was when the Clinton administration had to cut budget deals with the Republican controlled Congress in 1994. Bush elevated the curve and during his second term, it reclaimed its post-1960’s explosive growth under the Democrat controlled Congress from 2006, a trend that continues under the current president. 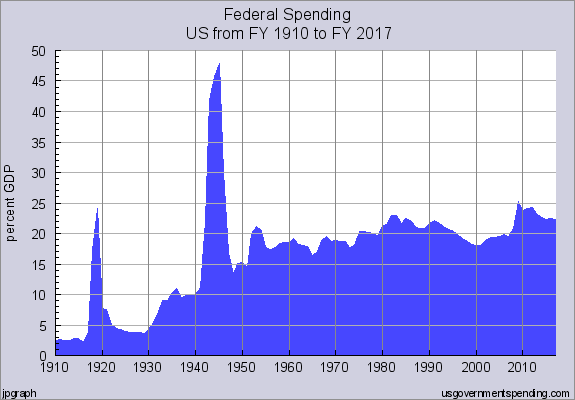 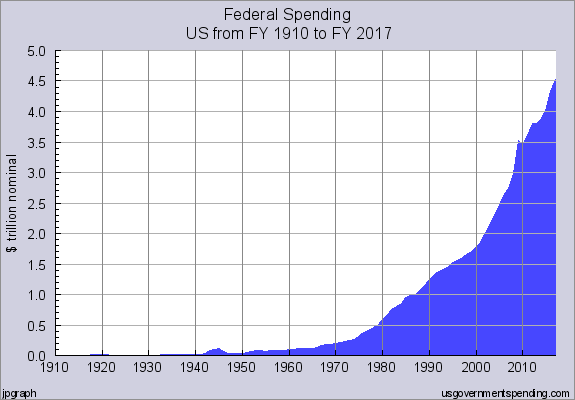 Why does the unabated growth continue?

I would propose that it is because rather than existing as a subset of “of the people, by the people, for the people,” as outlined in the Constitution and by Lincoln, the government has now become an independent, self-aware entity – just like SkyNet of the Terminator movie franchise.

While there are some who posit that there are no differences in political parties, that both collude to reach the same goals only at different speeds, I do not subscribe to that line of thought. These folks, with some basis, believe that the differences are but illusions. I just can’t agree – I do see significant differences between parties and their positions. What I think is a more likely illusion is that any political party can control our version of SkyNet – SkyGov – the federal government.

It is difficult to argue that SkyGov does not manipulate the political process, administrative law, funding mechanisms and monetary policy with the bureaucracy, the public sector unions, lobbyists and recipients of federal financial support to assures its own survival and growth. SkyGov is now a living entity beyond independent control and surges when the human collaborators, the Democrats, are in ascendance and is retarded when the Resistance, the conservative Republicans are.

These collaborators think they control SkyGov and they have proven that they will say anything and do anything to protect it. The recent secession debate proves that:

Pelvo White in Panama City writes: “The Southern Poverty Law Center in Montgomery, Ala., recently wrote “Hundreds of thousands of disgruntled conservatives, still smarting from the reelection of President Obama, are signing petitions to allow more than 30 states to secede from the United States — and they are being joined by a motley collection of white nationalists, neo-Nazis, and Klan sympathizers.”

Anyone that says that they want to secede, should be given a one way ticket to Iran. They are no longer Americans, chances are that they never were!

Mr. President, please sign an executive order such that each American citizen who signed a petition from any state to secede from the USA shall have their citizenship stripped and be peacefully deported.

Since SkyGov became self-aware on May 7, 1964, its creators and collaborators have set in motion the potential destruction of the American Republic. Just as there were humans in the Terminator saga who believed that technology was the answer to all of man’s problems, there are those today who believe government is. Since it is a common truism that science fiction often becomes science fact, one has to wonder – in the next several years will the Resistance consist of classical liberals, living in ruined tunnels under ruined cities, hunted to extinction by SkyGov and its collaborators?