Given that Obama is back at his “I Didn’t Know” routine, I thought it appropriate to bring this from March of 2012 back to the top.

There may actually be a medical explanation for Obama. In addition to suffering a clear case of narcissistic personality disorder, he exhibits strong tendencies of hypengyophobia – an abnormal fear of accepting responsibility.

This may explain why everything that happens in his administration is the fault of someone else and the most powerful man in the world is rendered powerless to govern America.

His regime has morphed from one of “Hope and Change” to “Not My Fault”…maybe that should be his 2012 slogan – seems to fit based on the statements he makes about America.

The economy was worse than he knew:

“I think we understood that it was bad, but we didn’t know how bad it was,” Obama said in an interview with KIRO in Seattle. “I think I could have prepared the American people for how bad this was going to be, had we had a sense of that.”

Anyway, it is your fault:

“This is a great, great country that had gotten a little soft, and we didn’t have the same competitive edge that we needed,” Obama told Orlando, Fla., TV station WESH.

Or maybe it was the tsunami in Japan:

And there’s no question that we have — this economy has faced headwinds this year, a variety of them, including the earthquake and tsunami in Japan, the increase in oil prices, energy prices that resulted from the unrest in the Arab world, and the situation in Europe also.

No, it is the uncooperative “do-nothing” Congress:

Obama is trying to set the table for the 2012 election to portray himself as running against a do-nothing Congress. The problem is that half of Congress, the Senate, is controlled by his party. Obama has been on the campaign trail demanding that Congress vote on his latest stimulus package. So Senate Minority Leader Mitch McConnell (R-Ky.) proposed a vote on the measure Tuesday, but Senate Majority Leader Harry Reid (D-Nev.) wouldn’t allow it because he knew it didn’t have enough Democratic votes to pass.

Let us also not forget that the Democrats had controlled the Congress for the two years prior to the Age of Obama and also the first two years of his only term. Congress actually did a lot…to damage the economy by spending two years focused on passing Obamacare and ignoring the economy.

Maybe that is why we haven’t had a budget in over 3 years. Oh, wait…that’s because Harry Reid won’t even bring it to the Senate floor for a vote after Obama’s last attempt at a budget got exactly ZERO votes in favor of it.

The last time the Democratic-controlled U.S. Senate passed a budget was April 29, 2009 — 1,000 days ago. It’s no mystery why: They don’t want taxpayers to know about the trillions they’re wasting.

A published budget would be an election-year death warrant for Senate Democrats, because Republican Senate candidates would stuff its highlights into every mailbox they could.

As Sen. Jim Inhofe, R-Okla., points out, going budget-less for so long has devastated our economy as Democrats have spent “$9.4 trillion and added $4.1 trillion to the national debt,” plus over $1 trillion in deficits.

Is insisting on a budget just Republican carping? Back on April, 29, 2009, in his 15th week as president, Barack Obama expressed “how gratified I am that the House and the Senate passed a budget resolution today that will serve as an economic blueprint for this nation’s future.”

He made it a point to “thank Leader Reid, Speaker (Nancy) Pelosi, all the members of Congress who worked so quickly and effectively to make this blueprint a reality.”

A budget, according to the president 1,000 days ago, is necessary “to lay a new foundation for growth.” He praised Reid’s 2009 budget for its massive new spending, like “new investments in renewable energy that will create millions of jobs and new industries, new investments in health care that will cut costs for families and businesses, and new savings that will bring down our deficit.”

His energy policy (or lack therof) isn’t causing them and even if it was, there is no quick cure for high gas prices:

“We’ve seen it all before. We know better. You know better,” he told a crowd at Prince George’s Community College in Maryland. “There is no such thing as a quick fix when it comes to high gas prices. There’s no silver bullet. Anybody who tells you otherwise isn’t really looking for a solution — they’re trying to ride the political wave of the moment.” 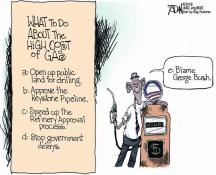 I actually agree with him on this. It takes 10 years to bring meaningful crude supplies on line but wait…hasn’t it been almost 10 years since Democrats blocked the development of ANWR? Here’s the news from the Associated Press in November of 2003:

The Senate on Wednesday narrowly rejected oil drilling in an Alaska wildlife refuge, rebuffing the Bush administration on a top energy goal it had hoped to win with a wartime security appeal.

Despite intense lobbying by pro-drilling senators and the White House in the hours leading up to the vote, Democrats mustered the support needed to remove a drilling provision from a budget resolution expected to be approved later this week.

All but five Democrats voted against refuge drilling. There were eight Republicans who joined the Democrats in favor of barring oil companies from the refuge.

OK, so it has only been 9 years – but every day that we delay is another day longer it takes – if ANWR had been approved, it would likely be producing today. This doesn’t even count the Administration’s efforts to kill the deepwater industry in the Gulf of Mexico via the permitorium or killing even the transport of oil resources from Canada in the form of the Keystone XL pipeline.

Of course there is always the ubiquitous “catch all” category for all the ills and broken promises – it is George Bush’s fault:

Barack Obama is setting a record-setting number of records during his first year in office.

Just one year ago, fresh from his inauguration celebrations, President Obama was flying high. After one of the nation’s most inspiring political campaigns, the election of America’s first black president had captured the hopes and dreams of millions. To his devout followers, it was inconceivable that a year later his administration would be gripped in self-imposed crisis.

Yes, it’s all George Bush’s fault. President Obama is nothing more than a puppet in the never-ending, failed Bush administration.

If only George Bush wasn’t still in charge, all of President Obama’s problems would be solved. His promises would have been kept, the economy would be back on track, Iran would have stopped its work on developing a nuclear bomb and would be negotiating a peace treaty with Israel, North Korea would have ended its tyrannical regime, and integrity would have been restored to the federal government.

Oh, and did I mention what it would be like if the Democrats, under the leadership of Nancy Pelosi and Harry Reid, didn’t have the heavy yoke of George Bush around their necks. There would be no earmarks, no closed-door drafting of bills, no increase in deficit spending, no special-interest influence (unions), no vote buying (Nebraska, Louisiana).

If only George Bush wasn’t still in charge, we’d have real change by now.

All the broken promises, all the failed legislation and delay (health care reform, immigration reform) is not President Obama’s fault or the fault of the Democrat-controlled Congress. It’s all George Bush’s fault.

TARP was a failure and this actually was a Bush idea – but then Senator Obama thought it was a pretty peachy idea, too. No matter how much he sought to shift responsibility, he evidently opposed it so vociferously that that he voted in favor of it.

And now President “Not My Fault” is asking for another 4 years. It will be our fault if he gets it.

17 thoughts on “Obama the Hypengyophobic”