Most who come here regularly know that I have taken a somewhat unpopular stance on the NSA scandal.

Maybe it is my former work for the CIA…

Just kidding – I’ve never worked for the CIA and if I told you about things that I may or may not have done when I was not employed by Langley, I would have to kill you – or get someone to do it since I don’t know about those things. At all.

My position on the NSA was that based on what we knew at the time, the conduct was legal – and please understand that I make a strong distinction between legality and constitutionality. I was not arguing that it was right for them to do, what I was arguing was that the laws and the system of governance that we all are part of does allow it. This is what happens when we legislate in broad sweeping strokes and don’t fill in the blanks before we do. Just like “Comprehensive Immigration Reform” and “Obamacare” mean that we “have to pass it to see what is in it”, the USA Patriot Act is the Republican version of legislation gone wild.

The NSA is doing what it is not because it is right, they are doing it because they can – and we are letting them.

I also took that position for another reason – to illustrate the hypocrisy in our political system – and it is present in this argument in bushel baskets full.

Some of the strongest detractors of the NSA programs are the greatest supporters of Obamacare even though the information shared through Obamacare will be far more extensive and personal than just a phone number – or for that matter – the content of a conversation. The chart below from FreedomWorks shows that your health, financial and employment data will be washed through no fewer than 6 federal departments and agencies and before it is fed back to the states…and it will all come together in one repository at the Federal Data Services Hub. 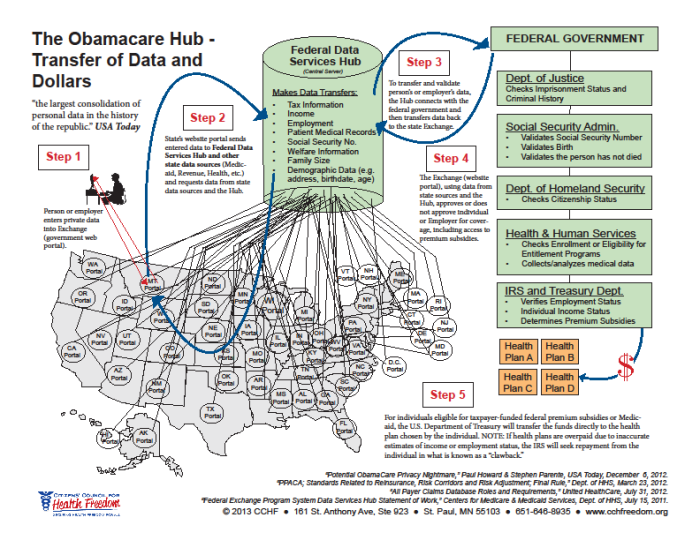 But this isn’t a bashing of Obamacare…what it is though, is an illustration of how the words that are written into legislation are implemented and how we cede power to invisible bureaucrats and government agencies when they take the words of a Patriot Act or a Patient Protection and Affordable Health Care Act and start kneading them into dough.

It also illustrates that if one opposed a thing because of its methods and yet supports another thing utilizing the same methods, it cannot be the methods that are objectionable, and the issue must be the thing.

So, I wonder how it is that liberals in our political system can support Obamacare and its personal intrusions and not support the NSA with PRISM and others? Could it be that it is not the data gathering that bothers them so much because it goes to something deeper – a pathological opposition to the intel community, the military and national defense perhaps? Does it say something that our last strong national defense Democrat president was Lyndon Johnson and every Republican President since Reagan has had military service while no Democrat has?

Why are we not seeing Democrats on the Capitol steps decrying both the intrusive nature of Obamacare alongside the NSA? Why is is unthinkably immoral to capture people’s phone data for the purpose of national security and it isn’t to prescribe them a little Viagra?

Why in the Hell would the assumption be that an agency that practices the tradecraft of secrets, i.e. the NSA, be less trustworthy than a handful of agencies that are proven to leak like a sieve?

Perhaps it is like immigration “reform”, the idea that we shouldn’t be able to protect our borders because there shouldn’t be borders?

Could it be because there are no Democrats and only petit Marxists wrapping themselves in the American flag for cover?

These two issues are shining examples of why the federal government should be pruned to its enumerated powers in the Constitution.

Too big to fail is too big to live.