There has been a lot of discussion on this site about Carroll Quigley’s proposition that there really is only one party and there is basically a conspiracy to control all of us through that mechanism. His writing about this very thing overshadows some really groundbreaking work on the evolution of societies and something that he called “inclusive diversity” – an explanation why America had succeeded in history where others have failed. I personally find Quigley’s propositions on “secret societies” a little too close to Marx’s proposition that the proletariat has no real values, they only adopt the values of the powerful but I do agree with his other scholarship – it is really sad that he is viewed as a conspiracy nut by so many because it leads to dismissal of some very valuable knowledge.

Don’t make that mistake – read his work even if you don’t buy into the “secret society” aspect. I can guarantee that you will learn something.

I posted a note about paranoia in the comments on one of Joe’s posts to see who would rise to take the bait. We tend to identify with things that we are most worried about and perceive general facts as direct personal attacks if we feel that particular thing is one of our weaknesses. I’ve done it – we all have. We don’t get defensive about our strengths because they are strengths – but we do tend to aggressively defend our flanks. I’ve learned that technique in interviewing people, I probe areas where I perceive weakness and their reactions tell me whether I am right or not.

We also tend to gravitate toward people, articles, books and blogs that confirm our bias. That is one major reason that I asked Chuck Edinger to join the fray – he tends to poke at the soft spots in all of us in a way that seems to elicit good responses from the group. I have been concerned for a while about the monolithic echo chamber that this place has become and its role in reinforcing a “reality” that I believe is false. I tested my theory during the NSA debate by deliberately posting things that I knew would test the “soft spots” and sure enough, my concerns were validated. When we have drifted so far to the right that I get accused of being an Obama supporter, we have lost the plot.

John Hinderaker at Powerline ran a poll last night about why, if we think conservatives are a majority, we can’t win elections and here’s what he found: 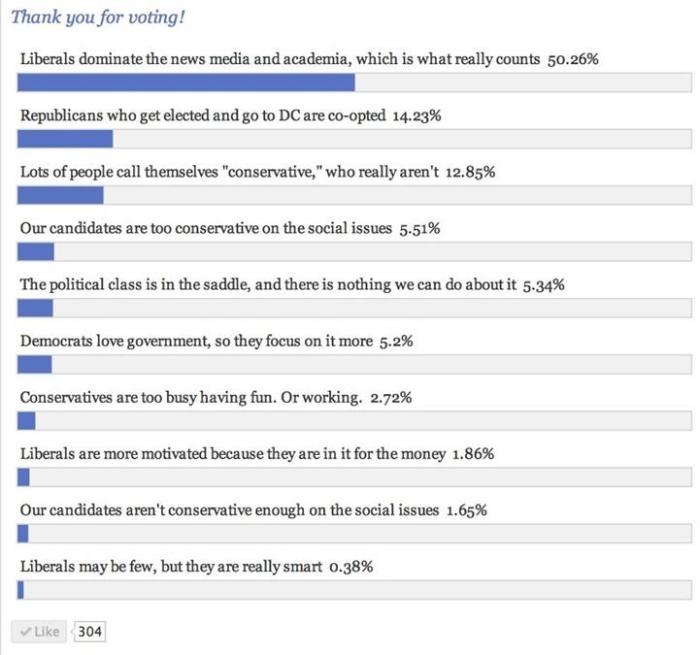 I don’t see “Rush Limbaugh is a progressive tool”, “You can’t trust Fox News”, “Carroll Quigley explains it all” or “Cloward-Piven” anywhere. When we get to the point that we start picking off Rush, Hannity and Fox because of some perceived slight or that they don’t pass a 100% purity test, our group is going to get pretty small, pretty fast.. That’s why I brought up the paranoia reference because that is exactly what they do…sooner or later, the paranoid’s peer group reduces to one…them.

I don’t say that to be mean or derisive, I say it because I see that we locking ourselves into a paranoia that can only be supported if Rush and people like him are actually “progressive” stooges.

I don’t believe that.

It appears to me that we rather than looking at objective facts, we have decided on a conclusion that we are comfortable with and then went out and constructed an explanation that supports it.

It is not bad or good, it just is. It is only bad if we don’t recognize it soon enough to actually hold our ideas up against reality and see where the gaps are.

I am concerned for the quality of debate here because I have been seeing a gradual paranoia set in over the last 12-18 months, almost a bunker mentality consisting of dismissiveness, arrogance and self-righteousness…and I count myself in that group. For the life of the blog, it has basically been the Joe and Utah show, interspersed with Kells, Texas, augger, Dusty and FC. I’m hoping that a few new voices can help challenge all of us to think with a little more rigor and open-mindedness.

My apologies to any that I have offended in this process.

17 thoughts on “Rising To The Bait”