…is that we don’t talk about Black Racism Club.

I’m going to borrow a very good question from commenter “melfamy” on a prior post that serves to sum up my angst and introduce what comes after:

Joking aside, in what way does advocating for the stampeding of George Bush to death advance Colored People?

I think he asks this in rhetorical form because it is pretty obvious – the answer is “nothing”.

I personally have been called a racist and a bigot many times. I chronicled the first time that it happened in my public blogging/commenting career here. The thing about a charge like this is that it depends on what the meaning of racism really is. Today, it means almost anything that is politically expedient for a liberal. John Hawkins has a great post at TownHall on this called “11 Liberal Rules for Racism in America” that outlines exactly what the term “racism” means to the left. I would propose Rule 12, the Undue Process Prejudice and Immediate Presumption of Guilt Rule, which states:

U.S. Rep. William Lacy Clay, D-St. Louis, said he was “amazed that in 2013 such hatred, intolerance and disrespect towards the President of the United States could take place at the Missouri State Fair.”

“Our fair is supposed to showcase the best of Missouri, instead, it showed an ugly face of intolerance and ignorance to the world,” Clay added.

Missouri Rep. Steve Webb, D-Florissant, said he was “incensed” by the incident.

“Sometimes apologies just won’t do. While I do not believe this represents all of rural Missouri, the racial undertones of a taunted rodeo clown dressed as our nation’s first black president is what the nation woke up to this morning,” Webb said. “It’s time for all of us, from both rural and urban areas, to fight this type of sentiment with a united front. Leaders of this state need to do more than accept a pressured apology.”

Because in the mind of a true racist, there can be no other reason for a rodeo clown to mock Obama than the fact that his skin is black (see Hawkins’ Rule 10). No other reason, rationale or evidence to the contrary is to be considered and even if the evidence to the contrary is obvious or if ever determined to be, the white non-liberal can never be completely exonerated because we all know that white non-liberals are always racist as if racism is a genetic condition like multiple sclerosis, Crohn’s disease or having green eyes.

With respect to the charges of racism where racism does not exist, in my post that I linked to above, I wrote:

Illegitimate and general charges of “racism” are such a difficult thing to counter because the person or group who has it leveled against them is faced with a classic logic difficulty. It is called “disproving a negative”. How do you prove something that didn’t happen (a lot like jobs “saved or created”)? It simply can’t be proven – it has to be assumed from other facts that are available or conditions that are visible, judging a situation by the premises that surround it. This is called conclusion by inference. When inference enters the picture, we leave the realm of fact and enter the realm of perception and opinion. Inferences can be prone to error for the basic fact that premises have to be interpreted. Interpretations are subject to personal filters.

Unless the act is clear and evident (in which case there is no argument), a charge of racism is one that can be leveled immediately but can rarely be answered with the corresponding immediacy – the only effective defense must be based of observation of behavior spanning a long period of time. While an unfounded charge is discrete and finite; the refutation is far more general and infinite.

It is easy to make a casual accusation. Proving that it doesn’t exist is far more difficult. It is like the old logic trap of “so tell me sir, when exactly DID you stop beating your wife?” There is no way to answer it without appearing guilty and even the refusal to answer can result in inference of an answer. This type of question is patently unfair and this is why questions like this, questions without foundation, are not allowed in a court of law. They create the presumption of guilt without a factual basis.

It is a specious, damaging and damnable charge when it is leveled without foundation. When it is real, it should be dealt with immediately and without mercy. It is poison in America. The most dangerous aspect is that when the term racism is overused beyond its true definition and it becomes synonymous with “politics that I don’t like”, it loses meaning and its effectiveness in describing a heinous activity. For these reasons, the same rules that apply to establishing a foundation of fact in court should be applied to charges of racism.

The accusers will seldom use this standard but the readers and listeners certainly should.

There is an immediate reaction these days to anything that varies a fraction of a degree from Obama’s policies. Just last week, Senate Majority leader Harry Reid said:

My counterpart, Mitch McConnell, said at the the beginning of the presidency of Barack Obama that he had one goal – and that is to defeat Obama and make sure he wasn’t re-elected. And that’s how they legislate in the Senate. It was really bad.

And we’re now seven months into this second term of the president’s and they haven’t changed much. It’s been obvious that they’re doing everything they can to make him fail. And I hope, I hope – and I say this seriously – I hope that’s based on substance and not the fact that he’s African-American.

First, just which member of an opposition party doesn’t want to see the incumbent president and his policies defeated? Is it common for an opposition party to work to support policies that they disagree with? I think not. I sure as hell don’t remember Reid or Nancy Pelosi working shoulder to shoulder with Bush on very much during his terms. As a matter of fact, I remember this:

Still, Reid said he has “no regret” over calling former Fed Chief Alan Greenspan a “political hack” — “because he was.”

“The things you heard me say about George Bush? You never heard me apologize about any of them. Because he was. What was I supposed to say? I called him a liar twice. Because he lied to me twice.”

And this gem from the Congressional Black Caucus in 2004:

Members of the Congressional Black Caucus (CBC) yesterday accused the Bush administration of deliberately exacerbating the violence in Haiti to hasten the ouster of President Jean-Bertrand Aristide.

They charged that the White House misled lawmakers about its intentions as it undermined Aristide — who was restored to power in 1994 by the Clinton administration following a coup — and forced him to flee to the Central African Republic.

Black lawmakers said the White House must prove that Aristide was not kidnapped.

They demanded conclusive evidence that the Haitian leader — whose 2000 election victory was internationally condemned as fraudulent — was not forced out at gunpoint.

“What makes this not a coup?” Rep. Charles Rangel (D-N.Y.) asked at the United Nations after meetings with Secretary General Kofi Annan and U.S. Ambassador John D. Negroponte.

Rep. Major Owens (D-N.Y.) added: “We are very troubled that this [Aristide’s ouster] was a terrorist takeover.”

The point is Harry Reid, a liberal white man, was able to call the sitting President of the United States a loser (which he eventually retracted) and lair and one call of his appointees a “hack” – and the Congressional Black Caucus could make outlandish charges against Bush – and neither was accused of racism.

I oppose Obama for the exact same reasons as I did Democrats Clinton and Carter before him – and I opposed certain “progressive” programs of Republicans George W. Bush and George H.W. Bush as well. 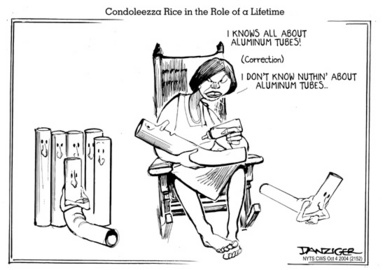 These are dangerous times. The cry of racism is being used to suppress First Amendment rights and has become the equivalent of charges of treason to the left.

This isn’t an indictment of individual blacks – but as a black person, you must know that these people – black establishment members and liberal whites – are speaking for you. When this much attention can be generated to a rodeo clown wearing an Obama mask in a performance while past history racism on the left is ignored, the black establishment risks the hardening of opposition to them and their wishes. The sad thing is that they are only being used by liberals to achieve a political goal. The Democrat establishment cares nothing about them except that today, they can use them as shock troops and cannon fodder on the front lines.

67 thoughts on “The First Rule Of Black Racism Club…”