Now for something completely different…. 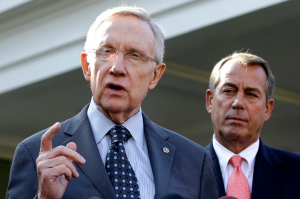 You see we have all been here before. For the last 3 years in the late summer as kids go back to school and parents around the Nation rejoices there is a little bit of theater that goes on being played out in the Nation’s Capitol. It happens immediately after the Labor Day holiday and usually lasts until early fall. Yes that’s correct folks it is the annual budget crisis passion play that stars John Boehner who plays the Weeping Cowardly Lion and Harry Reid who plays Joseph Goebbels, the Master of Propaganda.

You see each year by law, now I know that means nothing anymore in this Nation of laws, the U.S. Congress is

required to submit a budget to the American people. But for the past 3 years the U.S. Congress more specifically the U.S. Senate has not passed a budget. In each of these 3 years the Republican led House has submitted budget proposals to Harry Reid and Harry promptly demagogues the proposal and summarily places the Republican budget on his desk and never brings it to the floor of the Senate to even be debated.

read more about it at the Dryer Report

One thought on “Now for something completely different….”