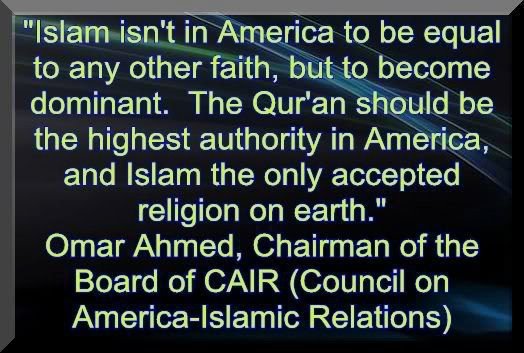 I am deadly serious about the assertion in the title of this post.  I also know what I am talking about; that’s why I’m as concerned about what Obama is doing as I am.  But this is not my ‘opinion;’ it is reality and the evidence is all over the media.  It’s just that too few Americans know what to look for, or recognize what they are seeing; and too many of those who do understand refuse to accept the implication of that evidence.  I am not among those who do not understand or who refuse to look reality in the face.  This will be a long post.  I will be honest: I plan to hammer home the point by presenting far more evidence than I would normally present.  This is part of the point: the evidence of treason is everywhere.

We start by asserting that the connection between the American Left (i.e. Progressives), especially the Democrat Party, and Islam has already been made, and it was made using nothing but public sources – most from the same liberal media that refuses to explain what it all means.  One of the strongest cases was made by David Horowitz in his book, Unholy Alliance.

Next, we make a more specific, two-part assertion: The Muslim Brotherhood is a mortal enemy of and is at war with the United States, and Obama is actively giving aid and comfort to this Muslim Brotherhood.  The evidence of this is in the media, but it is also in the records of our courts and even the FBI:

What if the U.S. Government and Media were Hiding Court Documents Proving Islam Intends to Overthrow the U.S. Constitution?

One thought on “The Enemy Is Already Inside The Gates”