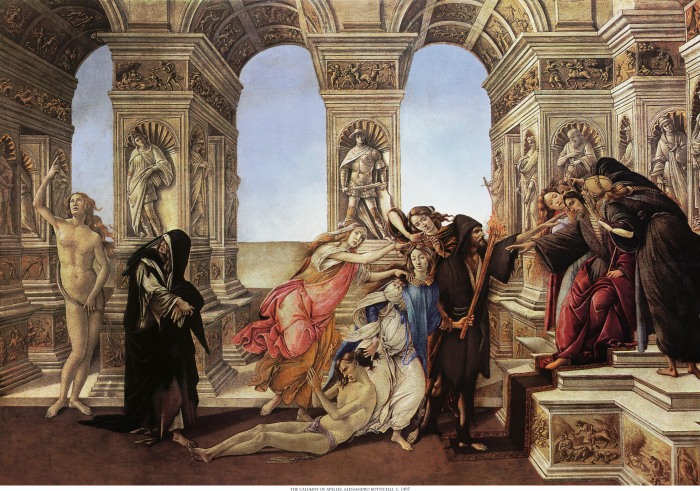 The Calumny of Apelles, Sandro Botticelli

One – and possibly the most – important historical aspect of the American system has been its stability and consistency. Americans have always been able to rest assured that what a thing means today, it will mean tomorrow. America has frowned on ex post facto (retroactive) approaches to everything. We are “innocent yesterday, innocent today, and innocent tomorrow” as my grandfather used to say – but even that seems to be changing as we in the South are charged with thought crimes, deemed guilty and sentenced to have all of our historical monuments and symbols summarily destroyed, thereby erasing the identity of generations.

When legal decisions are made in accordance with logic and reason, they tend to be predictable. This lends to a stable environment where risk can be mitigated in even long term commitments. The same goes for legislation, consistent creation, interpretation and application of laws and regulations are the very characteristics basic to economic and social stability.

Madison recognized the necessity of simplicity, clarity and consistency in legislation. He believed great pains should be taken to enshrine clarity, eliminating the nefarious nature of men who place themselves above other men. Madison memorialized this reasoning in Federalist #51:

In the early years of our Constitution, each branch of government sought its power in relationship to the other two branches. Each had its supporters as the newly formed government sought its boundaries. Some campaigned for a dominant executive, some for a supreme judiciary (Marbury v. Madison) and some for congressional/legislative superiority. In Federalist #78, Alexander Hamilton wrote:

“A constitution is, in fact, and must be regarded by the judges, as a fundamental law. It therefore belongs to them to ascertain its meaning, as well as the meaning of any particular act proceeding from the legislative body. If there should happen to be an irreconcilable variance between the two, that which has the superior obligation and validity ought, of course, to be preferred; or, in other words, the Constitution ought to be preferred to the statute, the intention of the people to the intention of their agents.”

Essentially, what Hamilton was saying is that every law should be considered constitutional as passed and unless there was an “irreconcilable variance” with the Constitution, the law should be allowed to stand. Out of this grew the doctrine of “presumption of constitutionality” which essentially shifted the burden of proof from the government to the citizen, requiring them to prove that a given statute is unconstitutional.

This doctrine, combined with the judicial supremacy of the Supreme Court as established in Marbury v. Madison (5 US 137 (1803)) is used to great effect by the government. President Obama has proven to be the greatest practitioner of the “catch me if you can” method of governance since FDR – when the dramatic leftward lurch of our country began. The Presumption Doctrine can be assumed to have had a significant role in the twice affirmation of Obamacare, affirmations which certainly appear to a reasonable layman were contorted and contrived to support any presumption of Constitutionality.

By any definition, the rule of law is ending. With the end of law comes arbitrary and capricious creation, meaning, and application of laws…and as Locke noted – tyranny. Social, economic and legal instability will result, creating an unsettled populace governed by mob rule, a society dominated by the Various Angry Aggrieved Groups that are less interested in achieving their rights under the Fourteenth Amendment or social cohesion than they are in reward or reparation via terror and retribution. None of this is about “fairness”, it is all about payback.

Such is a guaranteed death spiral that plays directly into progressive hands – the more chaos created, the more evidence more government control is needed. This all too predictable process is as close to a perpetual motion machine as we will ever experience.

America has exited the Age of the Rule of Law and entered into the Age of Calumny.

10 thoughts on “The Age of Calumny”