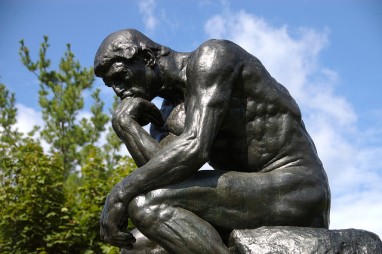 That’s not exactly true – it is our INABILITY to manage technology that is killing wisdom.

The sheer volume of facts and the speed at which they are accessed today is only equaled by the selective bias and velocity at which these facts are considered and discarded. Studies have shown that we have access to more information today than at any point in the history of the world and yet it seems we are careening helplessly toward idiocracy.

Facts are external and communal, knowledge is the consumption of facts and an internalization of wisdom is the end product, a fractional distillation of knowledge at an individual level. Facts are the raw material, knowing and reason are the processes and wisdom the desired end product.

The great fault in our stars is the idea that access to more facts will make mankind more intelligent but the fact is that mankind is simply not prepared for the opportunities tech has presented. The reasoning capacity of the contemporary human mind is greatly surpassed by the overwhelming availability of data. We simply can’t assimilate it all in a manner to make sense of it. As an allegory, if we view the brain as a factory, modern civilization has increased the raw material available without increasing the production lines. The throughput of reason has not increased maintain pace because there are so many random pieces of raw material coming to the production line too fast. Due to this sensory overload, the output of wisdom has actually been reduced as the production lines are clogged with too many related and unrelated facts inhibiting the assembly of wisdom. Some parts fit, some do not.

Another perspective is that of mixing a dozen different jigsaw puzzles in a big bowl and then trying to solve them all. The process becomes even more futile when we stop to consider that some of the puzzle pieces are not even parts of any puzzle, they are just randomly selected pieces that are the same shape as some of the others but slightly larger or smaller – not really fitting anywhere but close enough to fool us. These are designed to confuse and are inserted by interlopers not interested in solving the puzzle, actually they desire just the opposite – to prevent us from finishing the puzzle and seeing the resulting image the puzzle contains.

There is a term for nonsensical verbiage many use to fill time – it is called a “word salad” – a cacophony of noise masquerading as knowledge or wisdom issued from the mouths of those aiming to be perceived as wise or “in the know”. A few months ago, news dispatches from the world of Gaia acolytes purported that since salads were of no nutritional value, continuing to consume them was tantamount to environmental suicide. Whether salads are mankind’s suicide note is debatable, that they are without nutritional value is not. The same goes for a salad consisting of vacuous words.

Until we learn how to manage the tsunami of facts, they will continue to supplant knowledge and knowledge will continue to be substituted for wisdom. This process makes for an intense interest in politesse as a tool to avoid offense but in practice, this irrational adulation of formal politeness or etiquette leads to arrogant, undisciplined, unorganized thought resulting exactly the opposite conditions – overt hostility to any challenge or correction.

America faces an educational crisis. Public education has become regimented and systematized to the point that it has become dogmatic. We even refer to our educational services as school “systems”. Socratic learning has been largely replaced with regimented indoctrination, free thinking is not encouraged, and following the “system” is valued over critical thinking. Value is placed on the simple command of facts and not the critical “why’s” behind them. Being good at “googling” is not the same as being wise. We do appear to be more focused on teaching what to think and not how to think. Objective truths and established facts are dismissed as “your opinion”. Direct, vigorous debate and defending a position seem to be alien, just “sharing” opinions or presenting a list of facts is good enough.

We also appear to lack important overarching historical context, preventing us from viewing modern issues in proper context and facilitating understanding of the importance of historical context. The conventional wisdom that so many current events are “unexpected” and “unprecedented” when they are entirely predictable and painfully common is perhaps the greatest example of mankind’s collective and increasing ignorance.

I believe the following is perhaps some of the greatest advice I ever received from my mentor. He has taught me to 1) make the fewest decisions possible by helping others to understand and decide for themselves, 2) to take every second necessary to make a decision – if you are given 96 hours to take a decision, never decide before hour 95 and 3) not all decisions will be correct but one should strive to be directionally correct to maintain a desired trajectory. I struggle with these because my personality is action and results oriented. To manage my behaviors, I have these words printed out and taped to the top of my computer monitor where I can see them every time I look at the screen and are also written on the first page in my personal notebook:

In this age of drinking facts from a firehose, these words have served to increase my personal wisdom. I see no reason why this isn’t appropriate advice for mankind as a whole.