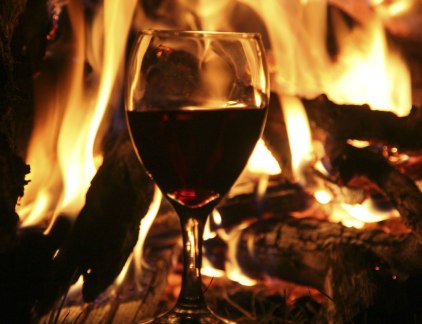 I was just with some business colleagues at a local restaurant that had opened their patio – and since it is still cool here in the evenings in Vancouver, they had the outdoor fire pit going. Several of my associates had early flights in the morning (I’m here through next week) and as they left me by myself warming my hands with a cup of coffee (my apartment is a 5 minute walk away), I was reminded of one of my favorite things to do as a kid – to sit by a campfire and to simply stare into the flames.

The dancing flames have different effects on different people but for me, they comfort me and put me in a contemplative mood. Maybe it was the wine or some of the best baked veal tortellini I have ever had but I started to muse about just how good we have it today, how much change for the better I have seen in just my lifetime, how much I really love my life, how much I want the same for my family and others, and how much I want to (and will) fight to keep it that way.

There are of course, many reasons to be negative about our contemporary times – a potential match up of a socialist authoritarian and a populist authoritarian in the presidential elections, a culture so politically correct as to have forgotten the difference between a penis and a vagina, a culture that has become so self-loathing as to be self-destructive, a global war on terror that our current president seems intent on losing and a rising generation of idiotic, Bernie Sanders supporting, postmodernist drones starring in an off-off-off-Broadway production of “Springtime for Hugo Chavez” to name a few.  To borrow an idiom from James Taranto and his elegantly subversive column in the Wall Street Journal, The Best of the Web Today, often times “Everything Seemingly Is Spinning Out of Control.”

Earlier today, I wrote a short, yet extremely depressing Face Book post about a train of thought I was considering about how civilizations rise and fall. It was not one of my most hopeful trains of thought. I wrote:

disappeared…vanished without a trace. A true fallacy is to believe that everything around us now, everything we enjoy, is somehow fixed in permanence.

There is evidence of technologically advanced civilizations, the technologies of which we cannot explain today, so it appears that technology is not an effective hedge against destruction. Personally, I think the serial destruction of the past is likely a precursor of our future – and that is likely a future of self-destruction, a turn towards the three facets illogic Orwell warned us of: 1) War is Peace; 2) Freedom is Slavery; and 3) Ignorance is Strength.

Western civilization is on a path to destroy itself and return to savagery to start it all over again. There are no end-times, we only reset every several thousand years so that humans can be reminded of what true reality looks like.”

Yeah. Not really something they print on the side of a Girl Scout cookie box or in a fortune cookie.

But then I had a thought that grew as the flames from the fire pit slowly seduced me into a more positive frame of mind. It was that any decline is a choice – we have the power to stop it – even if history is apparently not on our side. Civilizations in ascendance survive, those in retrograde do not. The signs of regression are all around us – but the answer is in there – WE HAVE A CHOICE. History is not necessarily predictive, we change our personal history every day for better or worse by our choices.

“Our minds tell us, and history confirms, that the great threat to freedom is the concentration of power. Government is necessary to preserve our freedom, it is an instrument through which we can exercise our freedom; yet by concentrating power in political hands, it is also a threat to freedom. Even though the men who wield this power initially be of good will and even though they be not corrupted by the power they exercise, the power will both attract and form men of a different stamp.”

We must stop this concentration, no matter the party or person we support – or if we support none of them. Just because we elect this or that politician, it does not change our ability to act or not act as individuals. Sometimes knowing when not to do something is more powerful than doing a thing. I think it was also Friedman who said, “Society doesn’t have values. People have values.” We should act accordingly.

Apparently I need to stare into a campfire more often.

2 thoughts on “A Fireside Chat [With Myself]”