A couple of days ago, I saw a snippet of a discussion about whether a person should have to pass both a civics and a current events test before they are allowed to vote. This idea has been around for a long time – I can remember a piece posted at CNN back in 2011 that was not so subtlety titled: “Don’t let ignorant people vote.” That got me to thinking about how people are kept ignorant and why there seems to be a booming business in peddling ignorance. Of course, political ideology always plays a role – politicians count on the fact that even though they are more work to sway, the ignorant make up an even larger percentage of the electorate than do dead people.

An observation I have made about people is that they tend to speak the way they think – admittedly not always true for everybody but I think it is for most. If you speak and react quickly and impulsively, it is likely that your thought process is also quick and impulsive. If you speak and react slowly and contemplatively, it is also likely that is the way you think. Of course, there are exceptions to every rule and the degree of intellect displayed in either of these scenarios is directly related to the quality of the words expelled from any given cakehole no matter the speed at which they are issued forth.

I think this also explains the superficiality of today’s so-called news. It seems that we have access to far more news sources and even though that access is now around the clock, the general public has less of an understanding of current events than they have ever had. In my mind, there are three reasons for that, 1) the understanding of the events the newsreaders read is superficial because that is the way they report them. Typically summed up in 15 to 30 seconds before moving on to the next “news” items with enough “entertainment” stories to keep us interested, the reporter or reporterette never stays with a story long enough to develop their own understanding of it, much less long enough to convey that understanding to others, 2) there is so much reporting overload that people cannot sort out the important from the asinine, that the “news” is simply background “noise” and 3) without someone to help point out how a 30 second snippet of China taking over the Spratly Islands in the South China Sea is connected to the US losing a significant strategic leverage in the area, the possibility that a person with an average public school education will make the connection on their own approaches zero.

Today, only the “news analysis” programs even begin to approach the level of detail necessary for a basic understanding of issues – and since 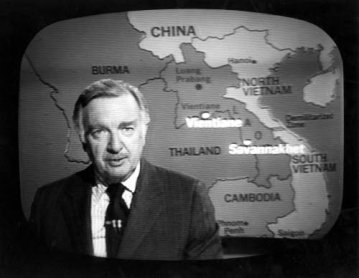 these all come with a political bent, most people don’t consider them “news.” Fair enough – I don’t get my news from CBS’s 60 Minutes, the O’Reilly Factor of Fox News or Rachel Madcow on MSNBC. To get all angles and be truly informed, you would have to watch all three. In the old days when the Alphabet Networks (ABC, CBS, NBC) and Walter Cronkite decided what you needed to know, at least you had time to think about it in between – as a kid, I remember seeing a 30 minute morning news show (mostly focused on local news and weather), a 30 -60 minute noon broadcast (mostly the same with “breaking news” salted in), an hour long 6 PM broadcast where the heavy national and world news was discussed and a 30 minute 10 or 11 PM broadcast that was basically a recap of the 6 PM news – all of that with nothing in between, so people were discussing and thinking about what was reported in those broadcasts. Not saying that was right or that the networks didn’t have their own agendas, it was just easier for people to digest what the talking heads were delivering.

What is the answer? I’m not so sure that there is a clear one. I know that not everyone has the same interest in history, philosophy or the same appetite for news consumption as I do. I do think that there needs to be a basic understanding of the issues to avoid being swayed solely by populism or a Madison Avenue ad campaign. I’d like to blame the schools but in truth, the responsibility for learning is as much or more the responsibility of the student than it is the teacher. I have often quoted Immanuel Kant (“a real pissant who was very rarely stable”) who wrote:

“A man may postpone his own enlightenment, but only for a limited period of time. And to give up enlightenment altogether, either for oneself or one’s descendants, is to violate and to trample upon the sacred rights of man.”

In short, to be “enlightened”, we must be constantly aware of our ignorance.

6 thoughts on “Should the Ignorant Vote?”