We all have crises of faith. We all suffer the tiring grind of the battle…Hell, I’ve been so fed up that I have semi-retired from the blog three times – the last time I came close to shutting the doors and deleting all the content. Last November, I had downloaded the material of each author who has posted here and was ready send them their property and wipe the blog…but I didn’t.

Some of you may know that my dad, a WWII veteran, died on August 15, 2012 (my mom passed on August 15, 2004 and my wife and I were married on August 15, 1981, so wierd, huh?) and I was going through a box of his stuff in January and I ran across his Army issued New Testament. As I picked it up, it almost fell apart and these pages were exposed – I noticed something at the back that I had never noticed before – it was this: 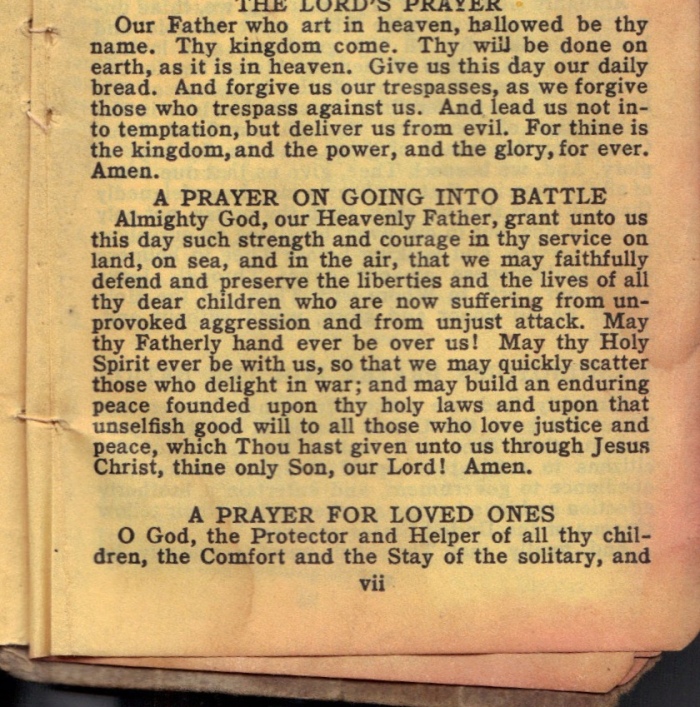 After I read that, I decided that I had to keep going with my efforts or I would dishonor my father’s memory.

I wanted to share with you all the other pages as well. I hope you find the same strength that I did when I read them. There may come a time in the not so distant future when a time of tribulation will begin. Think of these as bullets for the gun.

19 thoughts on “A Prayer On Going Into Battle”