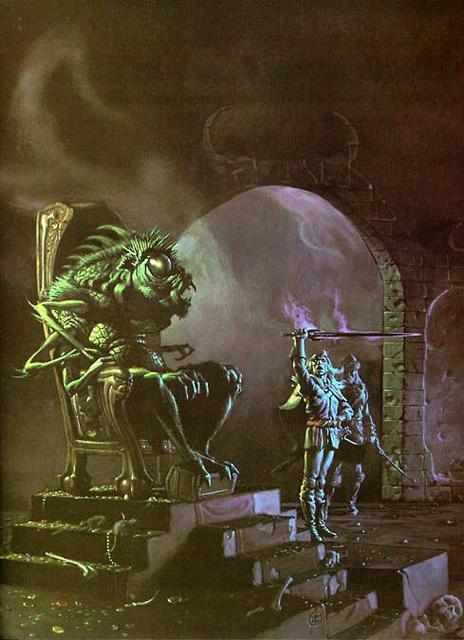 One of the escapist activities of my misspent youth in rural 1960’s Mississippi was reading those great pulp sword and sorcery novels. Long before Ahhhhnold donned the animal skins and started worshiping Crom, I was reading Robert E. Howard’s Conan series. Many folks don’t know the origins of Conan but Howard wrote those stories beginning in 1932, so old Conan looks pretty good for 84. Another favorite was by a Brit author with the unfortunate moniker of Michael Moorcock.
Moorcock wrote a series of stories about Elric of Melnibone, a tragic albino king and wielder of the evil runesword Stormbringer. Elric was the last emperor of Melniboné, ruler of the dreaming city of Imrryr and keeper of the Ruby Throne.
The tales of Elric brought together many images of life and death, fate versus free will, generations of tradition and the destruction of that tradition, thought versus action, evil versus good , and the difficulties faced when trying to reconcile and make meaning out of one’s own existence – but most of all, the tales of Elric dealt with the struggle between the Lords of Law and the Lords of Chaos.
In contemporary culture, it seems the Lords of Chaos have the upper hand.
Elric’s ancestors had ruled the old kingdoms for centuries, him being the 428th emperor. The power of the aristocracy of Melnibone was derived and sustained by the Lords of Chaos, Arioch, one of the Chaos Lords was Elric’s patron.
Point being that the struggle between chaos and law is not just a plot device in a pulp

sword and sorcery novel. These are real concepts that are in constant tension. Perhaps the greatest determinant of the success of Western Civilization has been the concept of law. It is not necessarily that there are codified or written laws, rather there are unwritten “laws,” common beliefs and behaviors that are shared by the members of the civilization and govern behavior. The greatest benefit of such “law” is that you can know what to expect from me and I from you without consulting a rule book. Chaos changes that.
In another flight of fantasy, 2008’s Batman flick “The Dark Knight”, Alfred Pennyworth describes the Joker to Bruce Wayne in these terms:

“Some men aren’t looking for anything logical. They can’t be bought, bullied, reasoned or negotiated with. Some men just want to watch the world burn.”

I was reminded yesterday that there are truly people in the real world who fit that description, true servants of the Lords of Chaos. One of those servants of Chaos is a Russian by the name of Alexander Dugin. Dugin is a dangerous character and seems to be the Rasputin to Putin’s dream of being Tsar. In 2014, Robert Zubrin took to the pages of National Review to review James Heiser’s book on Dugin:

“Finally, Heiser comments on Dugin’s worship of Chaos, and the adoption of the occult symbol of the eight-pointed “Star of Chaos” as the emblem (and, when inscribed in gold on a black background, the flag) of the Eurasianist movement.
“For Dugin, logos is replaced by chaos, and the very symbol of chaos magic is the symbol of Eurasia: ‘Logos has expired and we all will be buried under its ruins unless we make an appeal to chaos and its metaphysical principles, and use them as a basis for something new.’ Dugin dressed his discussion of logos in the language of Heidegger, but his terminology cannot be read outside of a 2,000-year-old Western, biblical tradition which associates the Logos with the Christ, and Dugin’s invocation of chaos against logos leads to certain inevitable conclusions regarding his doctrines.”
In short, Dugin’s Eurasianism is a satanic cult.”

When one thinks about it, much of Dugin’s philosophy of Chaos is evident in contemporary America – forced confusion over race, sex, gender, liberty, religion, opportunity – all leading to the assaults on the very institutions that Made America Great in the first place. Just as words have no meaning without a commonly understood context (for example, the word “dog” only has meaning because all humans agree what it means), higher concepts of liberty, freedom and independence lose meaning when common context is stripped away. For example, if Judeo-Christian tradition can be stripped away, then any concept (or country) based on such tradition can be delegitimized and subsequently destroyed.
Confusion among the people and divided loyalties destroy cultures, nations and civilizations -it was so in the fictional saga of the albino emperor of Melnibone and it is so in our own saga in the real world.
Elric eventually chose the Lords of Law over the Lords of Chaos and at a great price – the lives of his friends, his family and ultimately himself. Hopefully, that kind of strength still exists outside the fantasy world.

2 thoughts on “The Lords of Chaos”