Human nature is an interesting thing. Certain aspects of it never change, no matter how old we get. We are, at our root, creatures of habit and many (if not most) of our reactions to events are generally predictable.
I can remember watching the kids play at a summer family gathering many, many years ago in a squirt gun/water balloon war.
One of the boy cousins had one of those massive Super Soaker squirt guns – one of the ones that held about a gallon of water and could shoot water like a fire hose. He and the other boys were terrorizing the girls with it – because they had the superior firepower.
After about 15 minutes, one of the boys wasn’t paying attention somehow one of the girls captured it and now that the girls had the superior firepower, they returned the favor…the girls were actually more aggressive in retribution than the boys in the initial torment.
The interesting aspect was how hard the boys worked to keep the Super Soaker away from 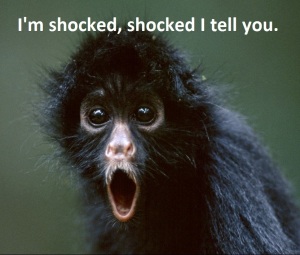 the girls and how the girls predictably took revenge when they captured it. Prior to the loss of the heavy artillery, I overheard one of the boys say something on the order of “We can’t let them win or they will do to us what we are doing to them!”
Doesn’t that describe the panic of the progressive left?
There seems to be a subconscious fear (and some just plain out in the open) that the right is about to take revenge for all the ills vested upon them over the past 8 years by an progressive elite ruling class and their enablers in the GOP. It is as if they know what they did was wrong and now they fear their opponents getting even now that their enemies have the Super Soaker.
You know what it is like to walk around with the knowledge that you did something wrong

(if you don’t maybe you are sociopath!) and how it eats at you. Due to the guilt, your mind some significant amount of time worrying 1) you will be found out and 2) retribution is coming and 3) you will be publicly embarrassed. Now imagine living for 8 years doing wrong to others and then knowing that for at least the next 4, the shoe is on the other foot. Imagine how deranged you would be walking around with that burden and waiting for the other shoe to drop – if you were an actor, you might even try a pathetic virtue signalling event to retain some semblance of you moral superiority by lecturing (hectoring) members of your audience.
Whatever tiny bit of conscience the progressive left has remaining is guilty and it is consuming them from inside.

2 thoughts on “The Super Soaker Election”