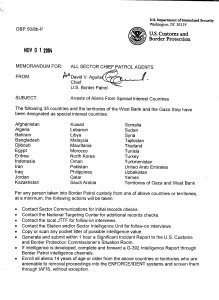 Well, we shouldn’t subject people from the seven countries identified by the Obama administration for extra scrutiny because there never has been a terrorist attack against America from these counties, right? The 9/11 hijackers were from Saudi Arabia, weren’t they? This Muslim ban will just make Muslim terrorists more willing to attack us, won’t it?

Except as far as I know, neither France nor Germany had been attacked by Tunisians driving trucks through crowds in “defense” of Islam…until they were. So, absence of evidence is not conclusive proof. I’d also point out that at least two attacks in America, the Boston Marathon bombings and the Pulse nightclub shooting in Orlando were conducted by children of immigrants from Chechnya and Afghanistan. Even half of the San Bernardino terrorist team was an American born man of Pakistani descent – his wife a Pakistani-born lawful permanent resident of the United States.

The 9/11 hijackers were trained in Afghanistan, so how is their nationality relevant?

As far as a “Muslim ban”, the EO says nothing about Muslims or a ban. It targets specific countries and temporarily postpones certain immigration activities, it does not “ban” them – so, both terms are inaccurate. But setting that aside, if you believe Islam is the “Religion of Peace” and most Muslims are peaceful allies, why on earth would a simple EO that restricts immigration from 7 out of the 36 countries and territories identified in the 2002 NSEERS program would turn them into enablers of terrorism if that wasn’t motivation already? Did I miss an uptick in terrorism over that 14-year period?

As a matter of fact, the NSEERS program (National Security Entry-Exit Registration System) was initiated in 2002 and was in operation until 2011 when the Obama administration decided it was “outdated, costly and ineffective”, indefinitely suspending it as of April 27, 2011, when the US-VISIT program was instituted as its replacement.

Why not more countries? President Trump’s EO orders that reviews be held and more countries may be added – some might be removed based on these reviews as well. The countries identified by the Obama administration’s implementation of the Visa Waiver Program Improvement and Terrorist Travel Prevention Act of 2015 were a starting point.

The basis for today’s outrage was established back on November 22, 2016 when the American-Arab Anti-Discrimination Committee (the chairman of which has strong ties to the Assad regime according to the Atlantic) submitted a letter co-signed by nearly 200 organizations to President Obama, calling on his administration to rescind the regulatory framework behind the NSEERS – so Trump couldn’t just use that framework and would have to create something entirely new that could be used against him. More than willing to do their bidding, former President Obama rescinded the program on December 22, 2016 as a Christmas present to the incoming president. Had Obama not dismantled the program, there would have been no need for an Executive Order to accomplish what the President just did.

The fact is the Trump Administration made a mistake. They fell into a trap set for them long before they took office. This isn’t about immigration, green cards or this “not being who we are” because for 15 years since the attacks on 9/11, this is exactly “who we are.” This is just another Democrat scramble for political advantage with politicians like Weepy Chuckie Schumer, Dick “Turban” Durbin and Comrade Fauxcahontas Warren enlisting the same merchants of outrage as usual.

One thought on “The Ban That Wasn’t”