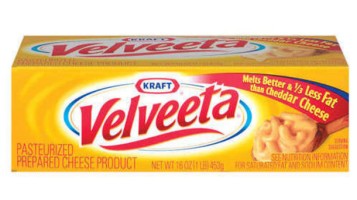 A very few times every year, usually New Years, for the College Football National Championships and the Superbowl, we make a dip from cans of Ro*Tel and a certain processed cheese product originally invented as a way to use up the scrap pieces of cheese from the production process and as a glue to keep hoops and big blocks of cheese from cracking.

As noted, we infrequently purchase said cheese product, so its location never gets imprinted on my mind map of the local Smith’s, Wal-Mart or Fresh Market (formerly Albertsons) grocery stores.

Yesterday, I walk into Wal-Mart to pick up something else, and at the front of the store is a huge display for Super Bowl Sunday consisting of big, pallet sized boxes of various jars of prepared dips, platters of sliced vegetables on ice and a big bin of cans of Ro*Tel. This display was framed by stacks upon stacks of bags of every sort of shaped potato and corn chip dip transporting mechanism known to man. I mean, there were flavors that do not exist in nature applied to all manner of ridges, ruffles, triangles and scoops. There were even “restaurant quality”, which I am left to assume is somehow better than the normal quality you get at home – who knows.

But one thing was conspicuously missing.

No Velveeta. Not even one single one pound or two pound foil wrapped building block of culinary heaven. 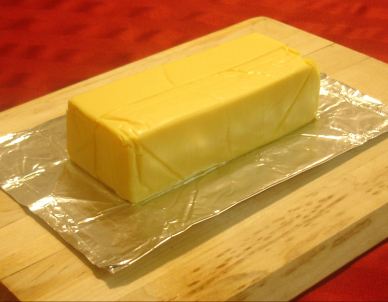 After a couple of rounds through the store proved I was incapable of locating a Great Wall constructed of these magical blocks of cheese product – it wasn’t on the chip aisle or anywhere around the real cheese in the deli or the dairy section – I went back up front to the display to get reoriented and organize my next exploratory mission. That is where I ran into Assistant Manager Mark.

Noticing the lofty title on his name tag, I figured this was my guy.  He would help me fulfill my quest as I wandered though an alien landscape, one seemingly organized through witchcraft rather than logic. A brief interrogation of Assistant Manager Mark would lead me to to Cheezus, the savior of seekers of the soft, smooth, easy melting truth. I inquired of Disciple Mark, “Say, Mark…any idea where the Velveeta is?” Much to my dismay, Mark had a very quizzical look on his face. You would have thought I had asked him what the air-speed velocity of an unladen swallow was.

Assistant Manager Mark then set of on his own voyage of discovery over to the check-out aisle where Ancient Nancy works. Ancient Nancy has evidently been with this Wal-Mart since it opened in the 1990’s. This level of seniority apparently meaning that Ancient Nancy had become the Yoda of the Park City Wal-Mart and had been imbued with a special wisdom – she was like the human topographical map of the store. After a brief consultation with this Enlightened Being, Assistant Manager Mark clasped his hand together and I swear he half-bowed to the Ancient One.

Returning with this new Wisdom, Assistant Manager Mark, who is at this point, smiling broadly, says, “In the middle of Aisle 14, across from the crackers.”

“Hmmmm.” I say a bit perplexed. “I don’t really put crackers and Velveeta together, Assistant Manager Mark…but OK. Don’t you think you might sell more of it if you put some up here beside the display of Ro*Tel and maybe put it over by the chip aisle?”

I could hear the gears turning in Assistant Manager Mark’s head.

“You know, that’s not a bad idea,” quoth Assistant Manager Mark as the smug look of a cat who just ate the canary crossed his young mug.

Being the helpful business guy I am, I figured this was a great mentoring opportunity, so I said, “Great. I’ll head over to Aisle 14 to acquire some processed cheese product and while I’m gone, why don’t you head over and see what Ancient Nancy thinks. Next time I come in, you might just be Special Assistant to the Store Manager.”

One thought on “The Questo for Queso”