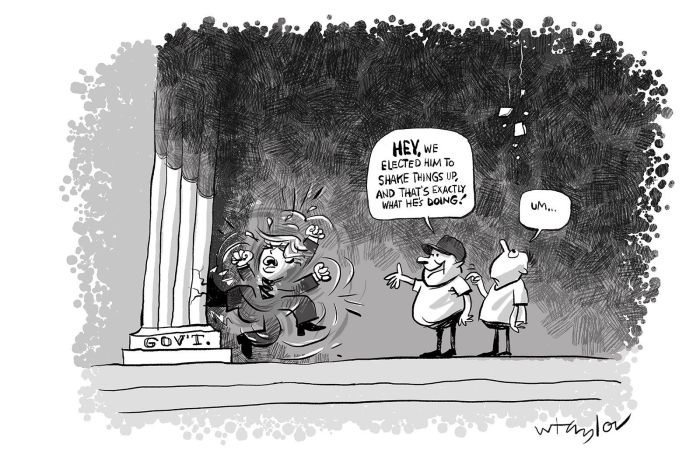 If it seems that America is undergoing a permanent, monthly/weekly/daily temper tantrum – that’s because it is.

While our President has done some very good things for our country in his short tenure, he has proven that he has no compunction about getting down in the playpen with his progressive and NeverTrump detractors and rubbing the fecal material back onto them that they take from their soiled diapers and try to smear him with. In the past, that hasn’t happened. Democratic presidents never face such because they face a prim and proper GOP (that has always been unwilling to throw crap or talk smack for fear that reflects badly on them at the Washington parties)…and the Democrats always have the defensive bulwark of the Yellow Journalist press to explain away the lies told and to scold the public for hearing and seeing what their lying eyes and ears supposedly didn’t see or hear.

GOPer’s are simply expected to show up with crap smeared all over them and like it.

Trump is possibly the first person to talk back to government establishment the way they speak to everyone else. He’s up in their face with his juvenile tweets, challenging their equally juvenile accusations and reporting (CNN is about to change their name to SNN – the Stormy Nudes Network).

But this playpen ain’t your normal playpen – this is the Octagon with Conor McGregor on one side and Tito Ortiz on the other. This is unsettling to America to witness. If there is one thing that creates tension in America, it is uncertainty. Americans like black and white – if it’s bad, just give it to me straight. We don’t have that today – there is more movement in our day to day lives than a Phil Niekro knuckleball. The junk thrown at us out of DC right now is unhittable (which is more than I can say about the Nationals’ mound dwellers) and it serves to keep us in a state of constant confusion.

Even though this agitated state is decried by the press and the Democrats, it actually works to their benefit – especially in the upcoming midterms. What the Leftist Lords of Chaos are counting on is that people will get tired of all the chaos and vote to change for the sake of change. They don’t care because chaos is their natural state – people with cognitive dissonance are comfortable living in an unstable, illogical world because confusion makes sense to them.

They are simply counting on the GOP to give up and go back to enjoying being smothered with crap as a default condition…and the GOP has several retiring and leaving the House and Senate because they think they see the Porta-Potty honey truck rolling toward them.
Will we go back?

Who knows? At this point the Magic 8-Ball says “Concentrate and ask again”. One thing is for certain, if Democrats do take over the House, Trump is unlikely to change his tack. He’s been sailing against the wind since day one, so expect him to tack even harder and faster as the headwinds start to build.

As they say, it’s gonna get worse before it gets better.