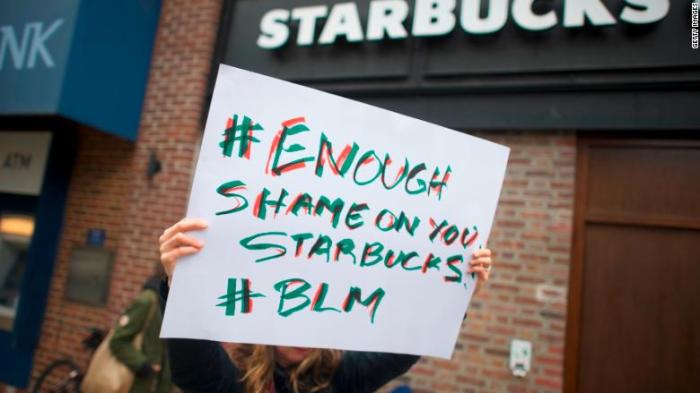 What is interesting to me about Starbucks getting dragged over a bed of hot coals is not the cries of racism – but how the incidents expose the penchant of progressives to walk around with a lighted match just looking for some spilled gasoline.

The progressive left always moans for “civility” when in fact true civility is the last thing they want. They often expect others to extend a courtesy they are never willing to extend to their opponents.

Civility is more than words, it is expressed in the way we act toward each other.

When faced with a confrontational situation, diffusing it is civility. When facing a misunderstanding, acts of understanding are the civil option – sometimes even when the other party is wrong. It used to be called “being the bigger man” (one assumes “being the bigger person” is the proper contemporary idiom).

Civility is leaving a place when you are asked to leave or complying with the rules to enable you to stay.

Like buying a cup of coffee or tea even if you don’t want one.

People have no right to occupy space in a private business whether there is a purchase requirement or not. A private business is not a public space – hell, even public spaces have rules. I can guarantee if you are in Central Park in New York City between 1 and 6 AM, you are going to be asked to leave – and if you refuse, you are probably going to get arrested.

Displaying a lack of civility and getting called on it does not equate to racism. Reacting badly to an easily resolved situation is not heroic, it is crass and uncivil. This is not institutional or systemic racism. These are examples of entitled people using their skin color as a weapon against a weak and compliant culture.

If the actions of Starbucks employees are proven racist, the deserve all they have coming their way – but in my opinion, this ain’t that.

The Starbucks issue is not Rosa Parks on a bus or a sit-in at a Woolworths lunch counter. This is just a bunch of jerks looking to make trouble where there is none because our Pavlovian culture has been trained to see racism anytime the bell is rung.

It’s all just so uncivil.

One thought on “Starbucks: Not Woolworths”