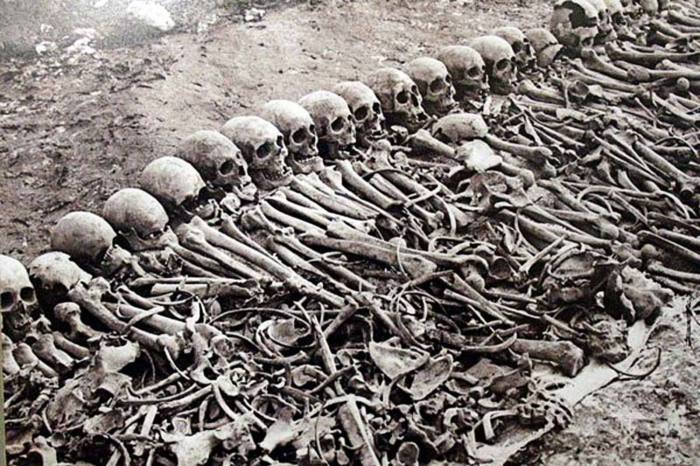 On April 24th, the world passed a grim milestone, one that unfortunately in these politically correct, diversity obsessed, “no culture is better than another” times will largely go unnoticed. It is the anniversary of an event that I would wager is not even spoken of in world history classes in America.

I consider myself a relatively educated man, yet I’ll have to admit ignorance of the significance of this event until I self-educated myself on it about 15 years ago.

That milestone is the 99th anniversary of the Armenian Genocide that occurred in Turkey, beginning in 1915. There were over 1 million Armenians exterminated in these pogroms over the span of a few years and this genocide was preceded by the Hamidian Massacres of 1894–96 and The Adana Massacre of 1909 – and the motivation for these?

the glory of the Ottoman Empire.

Some would say that the supposed “secular” leaders of Turkey are seeking that goal today.

To those who believe that opposition to fundamentalist Islam is rooted in fear, hatred and bigotry, I submit to you that it is not – its basis rests in the annals of history, a history that is there for all to see – if only we have the courage and honesty to observe it.

The United Human Rights Council records the atrocity this way:

The Rise of Turkish Nationalism

However, their hopes were dashed when three of the Young Turks seized full control of the government via a coup in 1913. This triumvirate of Young Turks, consisting of Mehmed Talaat, Ismail Enver and Ahmed Djemal, came to wield dictatorial powers and concocted their own ambitious plans for the future of Turkey. They wanted to unite all of the Turkic peoples in the entire region while expanding the borders of Turkey eastward across the Caucasus all the way into Central Asia. This would create a new Turkish empire, a ‘great and eternal land’ called Turan with one language and one religion.

But this new empire would have to come at the expense of the Armenian people, whose traditional historic homeland lay right in the path of the Young Turks’ plans to expand eastward. And on that land was a large population of Christian Armenians totaling some two million persons, making up about 10 percent of the Empire’s overall population.

Along with the Young Turk’s newfound ‘Turanism’ there was a dramatic rise in Islamic fundamentalist agitation throughout Turkey. Christian Armenians were once again branded as infidels (non-believers in Islam). Young Islamic extremists, sometimes leading to violence, staged anti-Armenian demonstrations. During one such outbreak in 1909, two hundred villages were plundered and over 30,000 persons massacred in the Cilicia district on the Mediterranean coast. Throughout Turkey, sporadic local attacks against Armenians continued unchecked over the next several years.

Fueling hatred toward Armenians within the Empire were the significant cultural differences between Armenians and Turks. Though a majority of the Armenian population in Turkey lived in poverty and despair, a small minority had excelled as best they could within their second class status, with many serving as professionals, businessmen, lawyers, doctors, artists, architects and skilled craftsmen.

Armenians had also, by and large, been well educated compared to their Turkish counterparts, who were largely illiterate peasant farmers and small shopkeepers. The leaders of the Ottoman Empire had traditionally placed little value on education and not a single institute of higher learning could be found within their old empire. The various autocratic and despotic rulers throughout the empire’s history had valued loyalty and blind obedience above all.

The Young Turks decided to glorify the virtues of simple Turkish peasantry at the expense of the Armenians in order to capture peasant loyalty. They exploited the religious, cultural, economic and political differences between Turks and Armenians so that the average Turk came to regard Armenians as strangers among them.

The Outbreak of War

When World War I broke out in 1914, leaders of the Young Turk regime sided with the Central Powers (Germany and Austria-Hungary). The outbreak of war would provide the perfect opportunity to solve the ‘Armenian question’ once and for all for the Young Turks. The world’s attention became fixed upon the battlegrounds of France and Belgium where the young men of Europe were soon falling dead by the hundreds of thousands. The Eastern Front eventually included the border between Turkey and Russia. With war at hand, unusual measures involving the civilian population would not seem too out of the ordinary.

As a prelude to the coming action, Turks disarmed the entire Armenian population under the pretext that the people were naturally sympathetic toward Christian Russia. Every last rifle and pistol was forcibly seized, with severe penalties for anyone who failed to turn in a weapon. Quite a few Armenian men actually purchased a weapon from local Turks or Kurds (nomadic Muslim tribesmen) at very high prices so they would have something to turn in.

At this time, about forty thousand Armenian men were serving in the Turkish Army. In the fall and winter of 1914, all of their weapons were confiscated and they were put into slave labor battalions building roads or were used as human pack animals. Under the brutal work conditions they suffered a very high death rate. Those who survived would soon be shot outright. For the time had come to move against the Armenians.

The decision to annihilate the entire population came directly from the ruling triumvirate of ultra-nationalist Young Turks. The actual extermination orders were transmitted in coded telegrams to all provincial governors throughout Turkey. Armed roundups began on the evening of April 24, 1915, as 300 Armenian political leaders, educators, writers, clergy and dignitaries in Constantinople (present day Istanbul) were taken from their homes, briefly jailed and tortured, then hanged or shot.

Next, there were mass arrests of Armenian men throughout the country by Turkish soldiers, police agents and bands of Turkish volunteers. The men were tied together with ropes in small groups then taken to the outskirts of their town and shot dead or bayoneted by death squads. Local Turks and Kurds armed with knives and sticks often joined in on the killing.

Then it was the turn of Armenian women, children, and the elderly. On very short notice, they were ordered to pack a few belongings and be ready to leave home, under the pretext that they were being relocated to a non-military zone for their own safety. They were actually being taken on death marches heading south toward the Syrian Desert.

Muslim Turks who assumed instant ownership of everything quickly occupied most of the homes and villages left behind by the rousted Armenians. In many cases, local Turks who took them from their families spared young Armenian children from deportation. The children were coerced into denouncing Christianity and becoming Muslims, and were then given new Turkish names. For Armenian boys the forced conversion meant they each had to endure painful circumcision as required by Islamic custom.

Turkish gendarmes escorted individual caravans consisting of thousands of deported Armenians. These guards allowed roving government units of hardened criminals known as the ‘Special Organization’ to attack the defenseless people, killing anyone they pleased. They also encouraged Kurdish bandits to raid the caravans and steal anything they wanted. In addition, an extraordinary amount of sexual abuse and rape of girls and young women occurred at the hands of the Special Organization and Kurdish bandits. Most of the attractive young females were kidnapped for a life of involuntary servitude.

The death marches during the Armenian Genocide, involving over a million Armenians, covered hundreds of miles and lasted months. Indirect routes through mountains and wilderness areas were deliberately chosen in order to prolong the ordeal and to keep the caravans away from Turkish villages.

Food supplies being carried by the people quickly ran out and they were usually denied further food or water. Anyone stopping to rest or lagging behind the caravan was mercilessly beaten until they rejoined the march. If they couldn’t continue they were shot. A common practice was to force all of the people in the caravan to remove every stitch of clothing and have them resume the march in the nude under the scorching sun until they dropped dead by the roadside from exhaustion and dehydration.

An estimated 75 percent of the Armenians on these marches perished, especially children and the elderly. Those who survived the ordeal were herded into the desert without a drop of water. Being thrown off cliffs, burned alive, or drowned in rivers.

During the Armenian Genocide, the Turkish countryside became littered with decomposing corpses. At one point, Mehmed Talaat responded to the problem by sending a coded message to all provincial leaders: ‘I have been advised that in certain areas unburied corpses are still to be seen. I ask you to issue the strictest instructions so that the corpses and their debris in your vilayet are buried.’

But his instructions were generally ignored. Those involved in the mass murder showed little interest in stopping to dig graves. The roadside corpses and emaciated deportees were a shocking sight to foreigners working in Turkey. Eyewitnesses included German government liaisons, American missionaries, and U.S. diplomats stationed in the country.

I would also offer this to you who presume that American patriotism is equivalent to the nationalism seen here – it is not.

American exceptionalism and patriotism is an inclusive concept, inviting other people and cultures to become part of it – we exclude no one from the possibility of being American. Turkish and German nationalism of history and its modern incarnations in Islam, were and are based on exclusion, keeping people out to the point of extermination and genocide – only accepting those with a specific racial, cultural or religious pedigree.

Ignorance of history is no excuse for the branding of Islam as the “religion of peace” when the historical record supports quite another outcome. Of course, there are those who say that such things are no longer possible in this “modern” world. If you believe that is true, then you aren’t paying attention to the current persecution of Christians in the Middle East and South Asia.

As philosopher George Santayana was famously quoted as saying:

“Those who cannot remember the past are condemned to repeat it.”

History does repeat, and we are foolish if we think otherwise.

One thought on “The Silent Genocide”