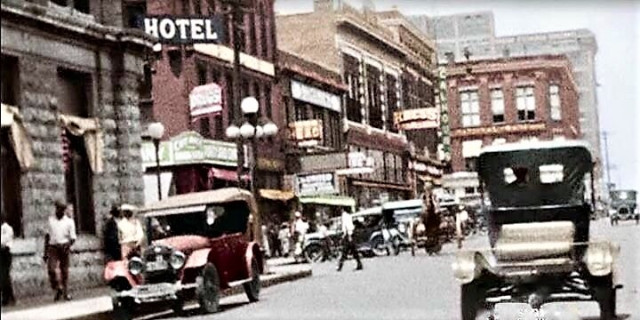 Trump’s rally in Tulsa is being held about a mile from the Greenwood District. Many only know of the tragic race battle that occurred there in 1921 due to this rally – but I posted about it over a year ago, writing:

“There is an interesting history story that is both tragic on an epidemic scale and enlightening as well. It is a story of racial division so great as to lead to mass murder and an example that success knows no skin color.

Just Google Greenwood, Oklahoma, the Greenwood Massacre or the Tulsa Race Riots of 1921.

The Greenwood District of Tulsa was known as the Black Wall Street. Read and learn a story of envy so deep it masqueraded as racial hatred and lead to over 300 black citizens being killed – but also learn that success, civic pride and prosperity can’t be stopped if people adopt successful cultural behaviors. Not even 400 years of systemic racism can stop it. Perhaps the progressive leaders of our major cities could take a lesson from Greenwood.”

Of course, due to the societal conventions at the time, Greenwood was a segregated black community – but it should be noted that it was a mirror image of white Tulsa. According to the History Channel, “… the area had been considered one of the most affluent African American communities in the United States for the early part of the 20th century.”

Given our changed society and the integration of 2020, why is it impossible to think that black Americans cannot succeed?

In my opinion, it is clearly not “systemic racism”. It is not for a lack of federal welfare programs – quite the contrary – federal programs have destroyed black America. If Greenwood and its citizens flourished in the Jim Crow days of the early 1900’s and the rampant racism that even reached the White House in 1919 in the form of the Democrat president Woodrow Wilson, why not today?

If the residents of 1900’s Greenwood succeeded without a massive welfare state in such a harsh national environment, why can’t black Americans succeed in 2020 after a century of change? That is a question that should be put to every member of Black Lives Matter.

One thought on “Greenwood Before 1921”