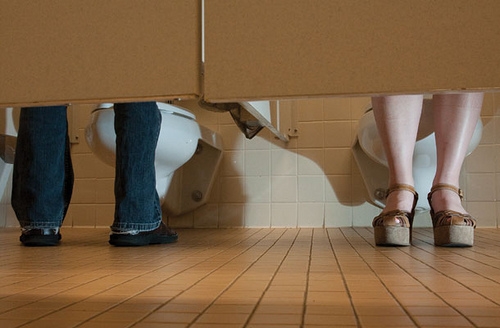 It certainly seems that there is a significant rise in deviant behaviors in America today. Again, as I have said many times, I do not use the term “deviant” as a pejorative, it is a term with a distinct, clinical meaning – according to Webster, it means “deviating (to do something that is different or to be different from what is usual or expected), especially from an accepted norm.”

One of these forms of deviancy is transgenderism, especially in the extremely young. Since the North Carolina “bathroom law” made the front pages, the normal news has been interspersed with stories of parents with children as young as 3 or 4 being allowed to “choose a gender” or to be brought up “genderless” or “gender neutral.”

This is insanity. No matter if you believe the world is controlled by an oppressive heteronormative patriarchy, a tribe of Amazons ruled by Princess Diana of Themyscira from magical Paradise Island or some other fantasy, the fact is that 1) allowing and supporting a child with the intellectual capacity of, well…a child, to adopt a gender non-conforming to their biological identity or 2) making that decision for such a child as a parent is tantamount to child abuse. That’s isn’t me talking – that is the conclusion of the American College of Pediatricians, a group that just released a statement containing these eight points:

Of course, progressive groups immediately attacked the ACP with articles with headlines such as this from Think Progress: “Hate Group Masquerading As Pediatricians Attacks Transgender Youth” and this from Patheos, “Sham Pediatric Group: Allowing Kids to Choose Their Gender Amounts to ‘Child Abuse’” – but think about the truth and reality of the eight items listed by the ACP above.

This is nothing more than a concerted attempt to alter the very meaning of our humanity. It is an open invitation for chaos and discord. I once stated that this is the beginning of the bellum contra rationem et naturam, the war against reason and nature itself.

Last year I tried to put myself in the mind of a contemporary correspondent to Thomas Jefferson and composed letter to him regarding the wisdom Jefferson revealed in his famous letter to o Samuel Kercheval. An excerpt follows:

“Having read much of Mr. Kercheval’s papers, blessed was I to find among them, a letter from you,  penned in your own hand on the 12th of June, 1816. In it I note this, your admonishment of public debt and government perfidy:

‘This example reads to us the salutary lesson, that private fortunes are destroyed by public as well as by private extravagance. And this is the tendency of all human governments. A departure from principle in one instance becomes a precedent for a second; that second for a third; and so on, till the bulk of the society is reduced to be mere automatons of misery, and to have no sensibilities left but for sinning and suffering. Then begins, indeed, the bellum omnium in omnia, which some philosophers observing to be so general in this world, have mistaken it for the natural, instead of the abusive state of man. And the fore horse of this frightful team is public debt. Taxation follows that, and in its train wretchedness and oppression.’

I much agree; however I must sadly inform you of another dreadful outcome which has befallen the country you served so well. It too, results in the bulk of the society being reduced to be mere automatons of misery, and to have no sensibilities left but for sinning and suffering. It is not the war of which you speak, the war of all against all, the bellum omnium in Omnia, this war is even more insidious. It portends the destruction of America and its Constitution.

It is the bellum contra rationem et naturam – the war against reason and nature.

At one time, I preferred to think we are engaged in a culture war. Having been recently disabused of that thought, I have come to realize that we are engaged in pugnam ad mortem, a gladiatorial fight to the death. This is a war on human existence. When people are wont to change the very soul of Nature and Nature’s God through force of law, Man’s own misplaced intellect and his medical skills, and to pervert the very course of human life and social order, Man violates the very natural laws defining his role in the universe – and this accords to not only a terrestrial constitution, so begins the attempt to redefine the very species called Man.

Perhaps such a thing was unfathomable in your time but it is a terrible scourge vested upon this beloved country by forces aligned with evil, some would say that they are in league with Lucifer himself. One thing seems clear, it is what happens when we turn from the “laws of Nature and Nature’s God” and seek to salve the wounds of conscience at the expense of others.

Sir, it is with great sorrow that I inform you that the country you and so many others like you spent your life conceptualizing, creating and nurturing is being destroyed by the evils of licentiousness, prevarication, unreason, heresy and a lust for power over others, including power over God.

Sadly, good sir, I fear no good will come of this. We are enduring the abusive state of Man and truly have no sensibilities left but for sinning and suffering.”