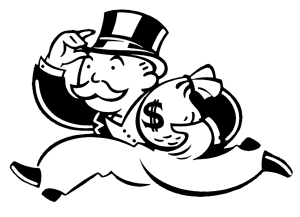 The rich are different.

Whether ideologically (collectivism), rhetorically (speeches) or physically (protests), the progressive movement seeks to organize the “masses” against “the rich”. They try to sell the idea that life is a zero sum game and if someone has more than you do, they must have done something to you to get it – if they have a bigger piece of the pie, it must mean that you have a smaller one to eat. They market the idea that “income inequality” is both cause and effect of capitalism.

And they set about using their favorite tool – government – to rectify this “situation”.

So they focus on the rich…because like the famous bank robber Willie Sutton, they know that’s where the money is.

The problem with this process is that like most progressive policies, it misses the target and hits the very people it is intended to help.
Any time you hear a progressive talk about “helping the middle class” or “working America”, grab your wallet.

Legislation, government policies or regulations do not affect the rich the way it does the middle class – or the poor, for that matter. Where the poor are net consumers of government resources and largely exempt from laws tied to income levels, the rich and the middle class are not.

As noted, the rich are different – and this is an area where that difference is significant – the rich have the ability to shelter income and assets, actually leveraging the laws to their benefit to reduce the impact of government. Most can actually find ways to reap profits from changes in the regulatory environment.

The middle class simply does not have the political clout, resources or disposable income to do this.

There is also the fact that while laws and regulations apply to all citizens, more often than not, these laws are not enforced equally. Often, regulatory schemes are enforced in an arbitrary and capricious fashion due to money donated to this or that political candidate or party or the cronyism a particular faction requires to implement and sustain a certain program or to achieve a desired result.

The progressives blame the existence and growth of “income inequality” on capitalism – and claim that this is an inherent characteristic if it. Let’s get this straight – all of this is NOT a feature of capitalism or the free market. Capitalism guarantees that the entire pie gets bigger. The growth of “income inequality” is actually an example of how the progressive desire for control and central planning of an economy distorts that economy and actually tilts it in favor of one class or the other.

The reason for the middle class “squeeze” is that progressive politicians need the poor for their votes and the rich for their campaign contributions and cronyism. They just need the middle class to shut up and keep paying the taxes that they have no power to avoid.

As per usual, the idea that the more government a particular economy is burdened with, the greater the “inequality”. 70 years ago in 1944, F.A Hayek wrote:

‘I believe it was Lenin himself who introduced to Russia the famous phrase “who, whom?”– During the early years of Soviet rule the byword in which the people summed up the universal problem of a socialist society. Who plans whom, who directs and dominates whom, who assigns to other people their station in life, and who is to have his due allotted by others? These become necessarily the central issues to be decided solely by the supreme power.

More recently an American student of politics has enlarged upon Lenin’s phrase and asserted that the problem of all government is “who gets what, when, and how.” In a way this is not untrue. That all government affects the relative position of different people and that there is under any system scarcely an aspect of our lives which may not be affected by government action is certainly true. In so far as government does anything at all, its action will always have Borne effect on “who gets what, when, and how.”’

If progressives truly understood economic matters, if they wanted to truly decrease “income inequality”, they would reduce government, not increase it – but they won’t – because less government creates less opportunities for graft and corruption.

Since progressivism is inherently immoral (or amoral as some have proposed) and about power over others, as long as it exists the very problems that it claims to solve will continue to grow.

Progressivism is the disease, “income inequality”, graft, corruption and cronyism are its symptoms.

2 thoughts on “Shocking News: The Rich Are Different”