And the Lord said unto Joshua, See, I have given into thine hand Jericho, and the king thereof, and the mighty men of valour.

And ye shall compass the city, all ye men of war, and go round about the city once. Thus shalt thou do six days.

And seven priests shall bear before the ark seven trumpets of rams’ horns: and the seventh day ye shall compass the city seven times, and the priests shall blow with the trumpets.

And it shall come to pass, that when they make a long blast with the ram’s horn, and when ye hear the sound of the trumpet, all the people shall shout with a great shout; and the wall of the city shall fall down flat, and the people shall ascend up every man straight before him. 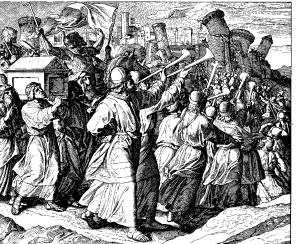 The current hue and cry emanating from the progressive left is irritating but quite valuable because it clearly tells you who the enemies are.

For decades, secular progressives have used government to go to war with all cultural and religious institutions that threatened their power. Now the shoe is on the other foot as Trump’s cabinet picks indicate an end to the status quo and it appears the primary purpose of every agency head is to eliminate that agency.

Progressives draw not only power from government, but both their identities and self-worth as well. It’s all about the virtue signaling of government action for them because in their world, there is nothing but the government. It is both the organizing principle and the organization itself.  Like all good socialists, government is the plan and there can be nothing except the plan, all else must give way.

That’s why Marx hated religion. Any form of socialism/communism cannot afford to have a competing system of control where people listen to any power higher than that of government.

Our little petit-Marxist American progressives have the same problem.

I’m sure that even the secular humanists in America remotely recall how the Israelites won the Battle of Jericho.

To our little progressives friends, the “J” in Donald J. Trump might as well stand for

“Joshua” instead of “James.” That is significant when one realizes to them, Washington is the city of Jericho…and  in Trump’s big band (Trump’s cabinet) the violin section has just assembled their bows and the Trump-et section is beginning to warm up and before the Trumpster blows the first horn, the government loving progressive “inside the beltway” crowd are kvetching that the walls are about to come down.

I have proposed – and I’m thinking validation may be soon coming, that the Third Law of Political Physics is in play here – that every action requires an equal and opposite reaction. Given how far left and how authoritarian Obama and his clown show took the country, it may take an equally authoritarian force to swing the pendulum back to the right. We may not like it – but that force may be Trump.

I’ve never liked Trump’s authoritarian streak. I dislike that as much as I do the fact he is no conservative – but in all fairness to him, he has assembled a cabinet distinct in its lack of connection with any political status quo. As a group, it seems to be a collection of reality-based folks with a history of getting things done, and getting them done in a way consistent with conservative thought – even if they aren’t doctrinaire conservatives. It has always been a common thought among those on the right that people, even most progressives, live their personal lives far more conservatively than they exhibit in public. That may be what we are seeing with Trump’s cabinet picks.

People worry about Trump’s authoritarianism, but the fact is that he has to give up power in either 4 or 8 years. If over those periods, he and his administration can disassemble and destroy enough of the entrenched power structure, when and if the Democrats get back into power they won’t have enough tools to drive the pendulum as far to the left as Obama did, that is a very good thing. It would mean that over time, we could get closer to what the federal government should be – small and in deference to the will of the states. Of course, that’s assuming Trump actually does the disassembly and doesn’t just continue the Obama process from the right, leaving the power structure in place for the next Republican president to go back to being all Teddy Roosevelt/Bull Moose on us. GOP presidents need to continue to cut away the progressive cancer over the long term to ratchet back DC’s power.

I’ve said before that it took 150 years to get here, we aren’t going back in 4 or 8…or even 20 but Trump and his cabinet may be the first shot of the fight to get that progression started.

I guess we will just have to wait and see.

One thought on “And The Walls Came Tumbling Down”