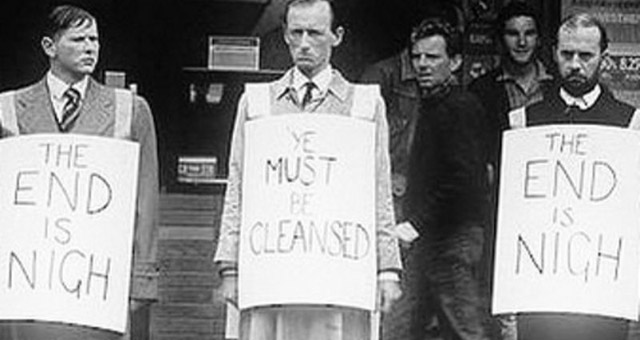 The left compares Trump to the worst humans who ever drew breath and his policies to the most heinous ever conceived. He’s a fascist, a Nazi, a Russian collaborator, a racist…but as of yet, not a single one of those things has been translated into a single policy that supports any of that. Sure, he might have said some inarticulate things – but neither his personal or political performance has substantiated charges made by his opponents.

The hysterical Democrat hyperbole is a big mistake.

It is a mistake, not because I think they could or should do better (or I want them to), it is simply a mistake because Trump has to do nothing to disprove it.

Time will take care of the proof.

The Democrats have become the equivalent of cultists marching around Times Square wearing sandwich board signs saying “The End Is Nigh! and yelling at everybody that it’s going to happen on July 4th.

On July 5th, when the sun rises as it always does, the sandwich board guys are proven wrong…and after they move the goalpost to July 15th and the end isn’t as nigh as they said, they are proven wrong again. Not a word needs to be said – just a little patience.

As Glenn Reynolds of Instapudit fame said (paraphrased), all the Democrats have to do is not act crazy – and they can’t even manage that.

All Trump has to do is have the patience to wait. Right now the passage of time is his best friend. For as much as the Democrats predict it, the end of Trump is not nigh.